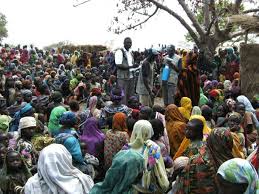 The United Nations High Commission for Refugees has begins the registration of Internally Displaced Persons in Bama from the ages of 17, with the aimof  providing food and relief materials for the IDPs. This was contained in the statement released last night by Col Sani Usman, the Army said, “As part of ongoing clearance operations of the remnants of Boko Haram terrorists in the north-eastern of the country, troops have been conducting clearance operations and patrols in various areas of operation.
“It is in this vein that a patrol team had contact with elements of terrorists at MOPOL and BOCOS general area yesterday Sunday 14th August 2016. “During the encounter, a Boko Haram terrorist was killed and the team recovered 5 bicycles, wheel barrow containing sack of foodstuffs and a Tecno mobile telephone.
“Troops on patrol also rescued 28 persons comprising 2 men, 9 women and 17 children of which there were 8 males and 9 females same at Bama Local Government Area, Borno State. “The rescued persons claimed to have escaped from Bula Musa village. They have been taken to Bama town for screening, profiling and possible hand over to emergency management and humanitarian agencies. “Similarly, troops deployed at Internally Displaced Persons (IDPs) camp in Bama, intercepted 23 persons comprising a man, 5 women and 17 children (10 males and 7 females), with 2 horses and 3 donkeys who also claimed to escape from Boko Haram terrorists in Bula Musa general area yesterday, Sunday 14th August 2016. “In a related development, the United Nations High Commission for Refugees (UNHCR) team led by Adam Zanna Karamma visited Bama IDPs camp to register the internally displaced persons who are below ages of 17 for distribution of non-food items. “The team stated that, they intend to train them on skills acquisition and construction of temporary shelter.
“In Dikwa, the troops also recorded influx of 37 IDPs comprising 2 men, 12 women, 12 boys and 11 girls from Gulumba Gana village which is about 45 kilometres astride Gulumba-Kumshe road axis, Bama Local Government Area. “They were screened by the troops and the Civilian JTF who later handed them over to the Dikwa IDPs camp management for further registration and rehabilitation.
“Troops deployed at Nigeria-Cameroon border in conjunction with Civilian JTF also arrested two escaping Boko Haram terrorists named Mohammed Mundilga and Ahmed Ali yesterday. “The terrorists who hailed from Gamboru Ngala Local Government Area, on preliminary investigation confessed that they were Boko Haram fighters and added that they sneaked into Gamboru from Abbaganaram village, Marte Local Government Area after tired of staying in the bush. “They attempted to disguise and pass on as IDPs but ran out of luck as they were found out. Both of them have been handed over to the Joint Investigation centre for further interrogation. “Troops also carried out clearance operation and fighting patrol at Wadama, Izakah, Gelemari and Kalizaram villages. “Troops located in Monguno received information that suspected Boko Haram terrorists were extorting money and other valuables from residents of Zankari village.
“They responded immediately and had encounter with the terrorists in which 2 of them were killed while one of them sustained gunshot wounds. “The troops recovered 1 AK-45 rifle and 3 rounds of 7.62mm ammunition”. Meanwhile, the Army said its troops on patrol at the outskirts of Maiduguri metropolis, Borno State at about 1.20am on Monday, arrested 4 suspected vandals of critical national assets in the area.
“The patrol team, intercepted Aliyu Jubril, 24 years old man, who is also a member of National Youth Service Corps, Ismail Baba, 22 years old and a student of Ramat Polytechnic, Mohammed Suleiman, aged 25, a driver and Mohammed Bukar aged 15, and assistant to the driver, at Silo along Maiduguri-Damboa road while attempting to cart away heavy armoured cable belonging to Power Holding Company of Nigeria (PHCN) that they vandalized.
“They lifted and loaded the heavy cables in a truck using a crane with registration number 09B-15BO before their arrest. One of the suspects came with a Honda Accord car (2001 model) with registration number GA 544-ABC in a bid to escort to an undisclosed location. “The suspects are being interrogated and would soon be handed over to the appropriate security agency.”