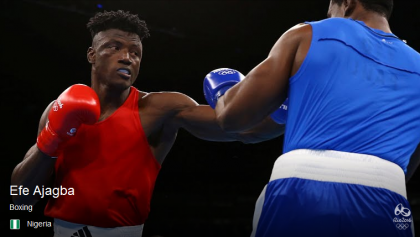 Nigeria’s sole boxer at the ongoing Rio 2016 Olympics Efe Ajagba has crashed out of the Games.

Ajagba also competed for the Nigerian team at the 2014 Commonwealth Games held in Glasgow. Competing in the super heavyweight division he defeated Junior Fa of Tonga in the round of 16 and Paul Schafer of South Africa in the quarterfinals.[2] He advanced to the semifinals where he was defeated by Joseph Goodall of Australia, meaning Ajagba won a bronze medal.