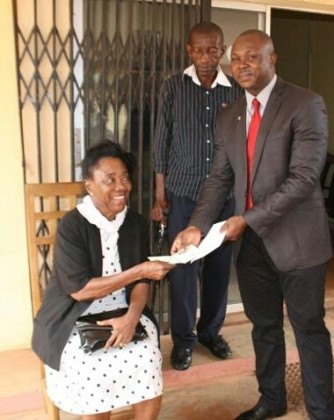 The Economic and Financial Crimes Commission EFCC, on Thursday August 18, 2016, through its South East Zonal Head of Operations, Mr. Obioha Okorie released a draft for N500,000 (five hundred thousand Naira ) to Dr. Veronica Ibeziako, a retired Chief Magistrate in Anambra State, being funds recovered for her by the Commission.

This was stated in a press release made available to the media by the commission’s Head, Media and Publicity, Wilson Uwujaren in Abuja on Thursday.

The former magistrate was swindled by fraudsters while seeking for financial assistance to enable her proceed for medical treatment abroad.

According to the victim, she was billed for a surgical procedure abroad, which was going to cost N3, 000,000.00 (three million naira only), but ended up being defrauded of N500, 000 (five hundred thousand naira).

Though investigations into the matter is still ongoing, the recovered fund was released to the victim to enable her attend to her financial and medical needs for which she was defrauded.