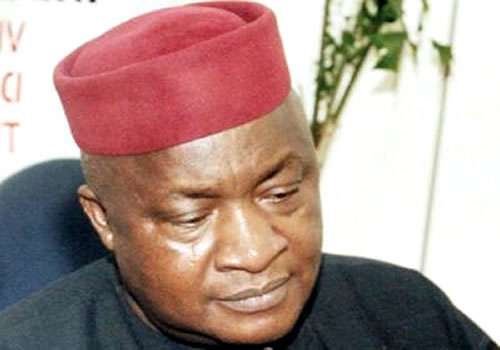 The Economic and Financial Crimes Commission re – arrested the former Governor of Imo State Achike Udenwa in connection with alleged campaign scandal at the last Presidential election.

In a statement issued by the Commission’s Spokesman, Wilson Ujuwaren, the Udenwa as a State Co-ordinator for The Presidential Campaign Organisation in Imo State was said to have collected the sum of N350,000,000 (Three Hundred and Fifty Million Naira Only) from the former Senator representing Kaduna South and Director of Finance for the PDP presidential campaign organisation, Nenadi Usman.

The suspect, in his statement to the Commission admitted receiving the money via Diamond Bank account No.0058805692 and 005950791 respectively on the 14th and 28th of January 2015 in three separate instalments. He added that the money came from a company named Joint Trust Dimension Limited. This same company was charged alongside Mrs Nenadi Usman and the Media Director of the PDP Presidential Campaign Organisation, Femi Fani Kayode before Federal High Court Lagos on a similar allegation.

Investigation however revealed that Achike Udenwa and one Viola Onwuliri, a former Minister of Foreign Affairs and State Minister for Education, who was his deputy at the Presidential Campaign Organization were the two signatories to the Diamond Bank account that received the money.

Achike Udenwa was a governor of Imo State under the flagship of People’s Democratic Party between 1999 and 2007 and became a minister
of Commerce and Industry between 2008 and 2010 under Goodluck Jonathan’s administration.