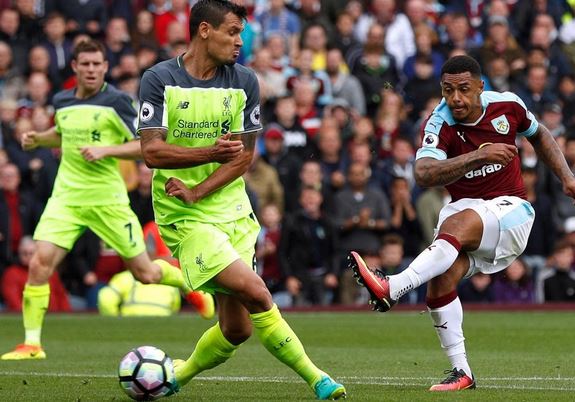 Liverpool suffered their first defeat in the hands of Burnley in the second week of the EPL matches.

Well before full-time, Jurgen Klopp’s face was as moody as the sombre sky that hung over Lancashire. With 81 per cent possession, 26 shots on target and 12 corners  and 852 passes to Burnley’s 207, Liverpool were undone 2-0 on Saturday afternoon.

From the riveting 4-3 victory over Arsenal last weekend, in which the Reds were unplayable for a 15-minute period after the second half, they looked like they had forgotten how to play against Sean Dyche’s side.

All the talk in the days preceding the encounter centered around the club’s problem position, with James Milner coming for the under-fire Alberto Moreno, but despite the alteration, it looked as though Liverpool were left back on the bus in the opening spell at Turf Moor.

The hosts were rapid, aggressive and positive from the first whistle, catching Klopp’s side cold.

It worked with Sam Vokes putting them a goal to the good after just two minutes.

Nathaniel Clyne ceded possession and Andre Gray fed the Welshman, who turned superbly and stuck the ball in the top corner.

The provider nearly turned scorer shortly afterwards too, but for a last-ditch intervention by Dejan Lovren.

Such a strong start from Burnley allowed them to gift Liverpool possession, stay compact and wait to profit on the counter.

The Merseysiders looked to draw them out, but were not patient or surgical enough in their approach, leading to mistakes which Burnley were happy to exploit.

One such error saw Steven Defour slice the the Reds open on the break before playing in Gray.

The 25-year-old showed fine feet and composure to shift two markers and find the far corner.