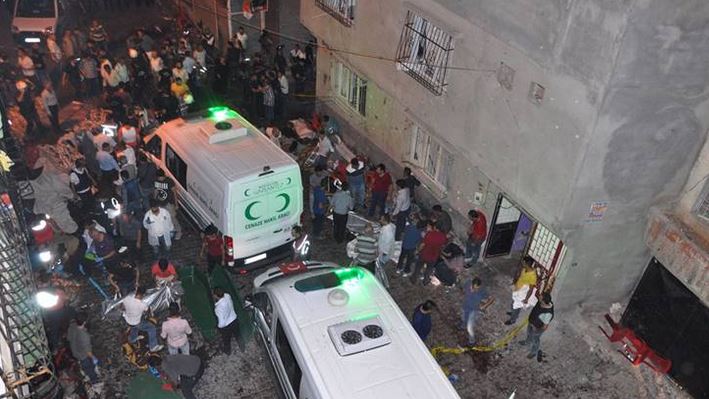 At least 50 people were killed on Saturday when a suspected suicide bomber detonated his explosives among people dancing on the street at a wedding party in the southern Turkish city of Gaziantep, the local governor’s office said.

President Tayyip Erdogan said it was likely that Islamic State militants had carried out the late-night attack, the deadliest bombing this year in Turkey.

The local governor’s office said in a statement 50 people were killed in the bombing, and more wounded were still being treated in hospitals around the province.

“The celebrations were coming to an end and there was a big explosion among people dancing,” said 25-year-old Veli Can.

“There was blood and body parts everywhere.”

Blood stains and burns marked the walls of the narrow lane where the wedding party was attacked while women in white and checkered scarves cried sitting crosslegged and waiting outside the morgue for word on missing relatives.

At least 12 people were buried on Sunday, but other funerals would have to wait because many of the victims were blown to pieces and DNA forensics tests would be needed to identify them, security sources said.

The pro-Kurdish Peoples’ Democratic Party, or HDP, said in a statement that the wedding was for one of its members, and women and children had been among those killed.

Mahmut Togrul, an HDP lawmaker from Gaziantep, around 40 km north of the border with Syria, told Reuters it was a Kurdish wedding.

Islamic State has been blamed for suicide bombings on Kurdish gatherings in the past as militants try to stir ethnic tensions.

“It was carried out like an atrocity,” witness Ibrahim Ozdemir said. “We want to end these massacres. We are in pain, especially the women and children.”

Turkey is still tense after an attempted coup on July 15 which Ankara blames on U.S.-based preacher Fethullah Gulen. He has denied the charge.