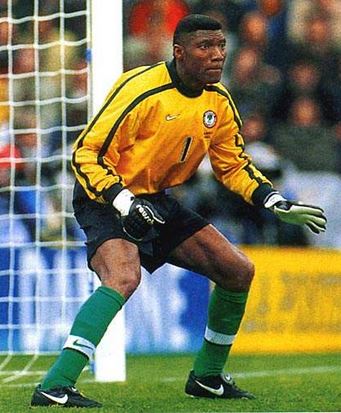 Rufai who made the offer after he watched the final of the Caritas Cup Soccer Tournament at the National Stadium, Lagos, on Sunday, said the training would hold in Staruf Academy located in Surulere.

The News Agency of Nigeria (NAN) reports the Arrow of God team trashed Heritage Orphanage, Lekki 5-0 to win the Caritas Cup Season 2 in which 12 orphanages participated.

The one-day event, a 5-A-side Soccer tournament, was organised by Kam-Caritas Foundation, while Staruf Sports Development with Kulture Kreation and K.G.K. Global Concepts were partners.

Rufai told NAN that he was thrilled by their skills and that the offer was to encourage them by providing a good platform for them to succeed in their football career.

“We all have a duty here to affect the lives of orphans and this Caritas Cup has presented a good forum for me to contribute my quota.

“The skills the young footballers displayed here need to be encouraged and this is the reason I have invited my academy to be part of the programme.

“I started my football career at a very tender age, my parents did not like football and didn’t encourage me either, but a stranger supported me and today, I am a force to reckon with.

“These orphans are looking out for us and we must look out for them and well, give them the attention, love and assistance they could not get from their parents,’’ he said.

The former Super Eagles goalkeeper, popularly known as “Dodo Mayana’’, said the passion for football globally has increased the interests of young people to develop their career with every chance.

“Sports unites the world but football is peculiar, you’ll observe activities on the streets, in schools, even corporate organisations have football teams, and it’s meaningfully engaging our youths,’’ Rufai said.

Jessica Ottu, Matron of Arrow of God, applauded the organisers and described it as a pleasant environment for orphans to display their skills and socialise with their peers.

Ottu also expressed delight with the victory of their team, adding that football training was part of regular activities in school.

“This event is marvelous, it is a good concept and I commend the organisers for bringing this large number of orphans out of the orphanages to have good time among themselves.

“I feel great because our boys have shown their capability but I am more satisfied because they are happy in this forum and interacted and have made friends,’’ she said.

Chryss Afiawari, Head of Home and Representative of Heritage Orphans, Lekki, described the event as a good outing for his pupils in spite of their 5-0 loss to Arrow of God.

Afiawari acknowledged that the Arrow of God team were good, played well and deserved the Cup, adding that it was a good exposure for his team.

“In every competition, there must be a winner but in this particular match, my team lost to a better team, but it’s a challenge to us to fortify.

NAN reports that the orphans were further engaged in games, dancing competitions, bouncing castle and were given branded Jersey, food and drinks.