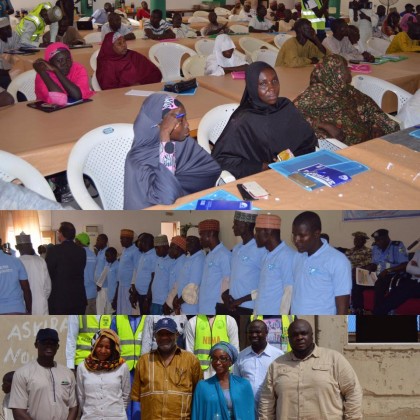 As part of the activities to mark the 2016 World Humanitarian Day, the Senate President, Dr. Abubakar Bukola Saraki, sent a technical team to Maiduguri, Borno State, to conduct interviews with domestic and international stakeholders working in the IDP camps in the greater Maiduguri area. The purpose of the visit was to collect information about the emergency relief, recovery and rehabilitation efforts in Borno State.

Saraki’s team were directed to review the coordination between the government of Nigeria and NGO/INGOS, the capacity of service delivery programs and receive feedback from the IDP’s themselves.

At the camps, the team interacted with groups of committed officials and volunteers of NEMA and SEMA, who stated that the government was doing all that it possibly could to aid and secure the IDPs. However, the complexity and scale of the emergency is far beyond the government’s capacity and that Nigeria simply cannot do it by themselves.

Speaking on the purpose of the visit, the Senate President stated that it was important to send a team to assess the humanitarian situation on ground in the North East, following reports from aid agencies that greater international attention and a more robust response is needed to alleviate the plight of the over 9 million Nigerians who are in need of relief in the Lake Chad Basin area.

“We cannot afford to take for granted the sacrifice and support of both our domestic and international partners in the North East,” Saraki stated, “This is why we must all sit down as quickly as possible to plan the transition from crisis, to relief and beyond. We must expedite the processes that are needed to bring about the recovery and rehabilitation of the entire region”

The Senate President’s delegation also represented Saraki at the North East Humanitarian Summit, hosted by UN OCHA and the Network of Civil Society Organisations, Borno State (NECSOB), where 150 IDP Ambassadors – 25 people chosen from 6 different camps – were inaugurated as representatives of the IDPs in Borno State. The responsibility of the IDP Ambassadors is to relay the concerns about protection, community input and empowerment of IDPs directly to government and international partners.

In a related development, the Senate President has called for an International Summit on the North East – similar to the one held in London for Syria which raised about $10 million. He also mentioned that at the resumption of the Senate in September, there would be a motion to create a Senate Ad-Hoc Committee to conduct a Public Hearing on the humanitarian response in the North East. This public hearing would be aimed at reviewing the recommendations of domestic and international partners in order to develop a sustainable framework for Nigeria’s emergency and humanitarian crisis management for the North East and future complex emergencies.