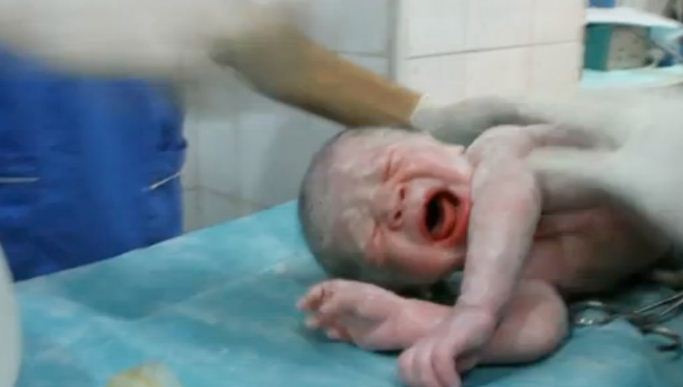 In a war-torn Aleppo in Syria, a baby was given birth in an emergency cesarean section, after the mother was seriously injured by a bomb in an airstrike on her way to the hospital.

According to CNN reports and footage, the baby’s mother, Mayissa’s arm and leg were broken and she was in shock as doctors remove inch-long pieces of shrapnel from her body.

“As doctors pull the baby from her gashed abdomen, dread rushes into the operating room.

“Her baby is silent; white as the tile. “Is his heart beating?” asks a person in the room. “No. I’m sorry,” a doctor responds.” the CNN report said.

While the baby’s umbilical cord was still attached, the Doctors pumped his chest, hoping to start the minutes-old heart.

“They are resolute as they put what looks like a small baster in the child’s nose and mouth, hoping to suction out any fluid blocking his breathing.

“A flutter in his umbilical cord is the first sign of life. His heart is working.” the report said.

A doctor had to grip him by the feet and thumps his bottom, which appeared to be a rough thing to do to a new born.

As human color slowly flows through the baby’s body, he was laid down, and he cried which reveals a great sign of life. His mother, too, survived the ordeal.