First ever African Board Games Convention Holds in Abuja 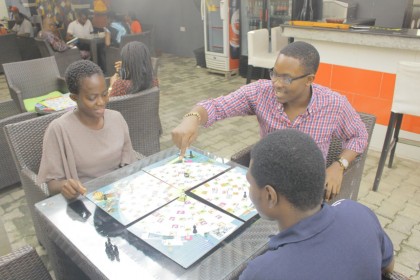 On Sunday 21st of August, Abuja was home to Made in Africa board games as KayCee Games in partnership with Decipher solutions hosted the first ever Boardgame Conventions in Nigeria  and arguably in the West African coast. The day was a mixture of Made in Africa boardgames; book exchange, music and spoken words all having an African content and message.

The African Boardgame Convention #ABCon2016 was created by Kenechukwu Ogbuagu who also is the founder and Creative Director of KayCee Games.

The event featured 7 out of 11 boardgame prototypes created by KayCee Games and caught all the attendees into a world of fantasy and imagination in an African setting.

“I started designing board game in 2013 in Calabar but it was just out of hobby and boredom. I never took it serious until June 2015 when I was in Ikorodu volunteering with an Organization. I started with Ukubuwa which means Greatness in Swahili language – though I actually misspelt it. The boardgame tries to tell the story of an average Nigerian and in a large extent an African. In fact, I even added some of my past stories; the game shows you the stages every young Nigerian is most likely to pass through and then immerses you in those situations. After Ukubuwa, I designed IJE which was inspired by a Nollywood movie I had seen when I was like 8 years old or so. It is about how a group of brave men entered the ‘evil’ forest in a bid to get items that would save their land. Only one person survives. The storyline intrigued me all through my childhood and I decided to let people into the world of bravery and courage. Since then, I have been able to design 9 more including one I designed to fit a particular brand and each of the games has an underlining Nigerian component to it.”. He explained when asked what inspired him to started designing board games”. 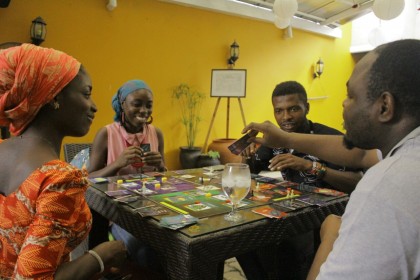 In 2013, non-digital games and puzzles racked up $1.9 billion in sales in the United Staes according to Toy Industry Association Inc., up 3 percent over 2012 and expected to rise in the following years. Board games/Tabletop Games contributed $700 million.

“Board games have proven to be a great contribution in relieving the human stress as well as increasing learning and knowledge. It has in recent times proven to also be a more-than-decent source of livelihood producing massive employment opportunities that can be categorized as almost all-inclusive”.

When asked if he intends to compete with the internet and social media, he responded, “Boardgames will never be able to compete with Facebook let alone the whole of the internet. An example is, how many games do you have in your phone and how much hours do you put in playing them compared to the twitting and facebooking times? Anyways, board games is not going to compete. It will be a conscious decision for people to play boardgames and they will because the advent of social media has surprisingly provided more opportunity for a more physical world where individuals, families and groups hope to have a more physical and more connected relationship with one another. That is the problem we are hoping to achieve.

we are creating board game centers and we currently have 2 in Abuja and hope it increases to 25 by December if we have the investments. This will provide people with more opportunity to play games and meet new people or strengthening existing ones”.

ABCon2016 has come and gone as KayCee Games dishes out other exciting moments that would thrill anyone interested in the world of board, card and dice gaming. This new industry poses a hug opportunity in helping to address the unemployment rate in Nigeria amongst young people and likewise serves as a made in Nigeria tool that could also be consumed globally yet telling our stories and our cultures.

‘People like Kenechukwu have proven the creativity and innovativness  of young Nigerians creating their value.