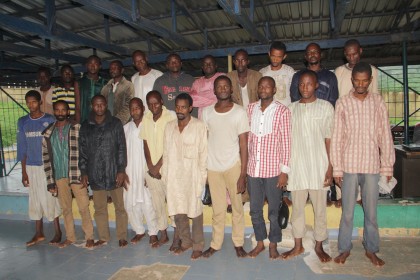 The Inspector General of Police, Ag. IGP Ibrahim K. Idris NPM, mni concerned about reports of car hijacking and removal of vehicles from where packed by unknown person(s) ordered a crackdown on criminals responsible for car hijacking and stealing nationwide.

Consequently, IGP’s Special Tactical Squad swung into action and arrested twenty nine (29) suspects from different states of the federation and also recovered twelve (12) exotic cars. The operation will be sustained to cover the entire country.

2. Members of the public are hereby advised to check through the above listed recovered vehicles for possible identification and provide proof of ownership to enable them reclaim same. The recovered vehicles are currently in safe keeping at the IGP Special Tactical Squad on Heinous Crime facility at SARS premises old Abattoir Guzape District, Abuja

3. Meanwhile, in a related development, the Inspector-General of Police’s Special Tactical Squad working on intelligence sourced in Kogi and Edo States, arrested eight suspects in connection with Kidnapping, Armed robbery and Cattle rustling in the two States. Three (3) AK 47 riffles and one hundred and forty seven (147) rounds of ammunition were recovered from them. All the suspects confessed to the crime and have admitted to the various roles they played in the commission of the offence. They will be arraigned in court at the close of investigation.

4. While commending the officers and men of the Special Tactical Squad for the high level of professionalism displayed in the course of the operation, the IGP assures members of the Public that the force is being repositioned with modern crime fighting techniques to tackle crime and criminalities in the country.