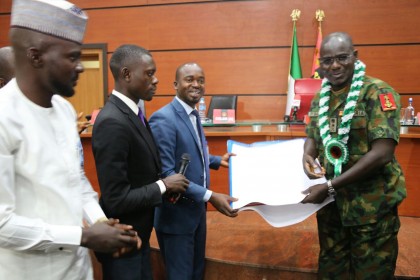 ………Dedicate same Officers and Soldiers of the Nigerian Army

The Chief Of Army Staff Lieutenant General Tukur Yusuf Buratai, has received the prestigious award of Kwameh Nkrumah leadership award. This was made known in a statement issued by the Acting Director Army Public Relations Colonel Sani Kukasheka Usman.  He said the prestigious Kwameh Nkurmah Leadership Award by the All African Students Union (AASU) was presented to the COAS for his exemplary leadership and commitment to duty and the fight against insurgency in the North East.

He stated that the Award was presented to at the Army Headquarters Conference Room, Abuja by a delegation of the Executive Committee members of the Union from various African countries and institutions led by its Nigeria Country representative and the Secretary General of union, Ambassador Akinyele Olasumbo.

According to them, the award was to enable them join other well meaning individuals and organizations to appreciate the leadership style, patriotism and commitment of the COAS which brought about peace and security in Nigeria. They further stated that the Award was to also encourage him to do more to clear out the remnants of the Boko Haram terrorists in the North East.

The union which had representatives from Nigeria, Cameroon, Cote D’Ivoire and Ghana further explained that the award would also spur other African leaders to ensure peace and stability of the African continent. In his acceptance remarks, General Buratai, thanked the Union for the award and said he was very elated and deeply humbled to be associated with the name and virtues of the highly revered African leader, the late Doctor Kwameh Nkurmah Prime Minister of Ghana as manifested in the Award and dedicated it to all the Officers and Soldiers of the Nigerian Army for their selflessness and commitment to duties that brought about this and may other accolades.

He stated that the Nigerian Army troops are doing well in the North East, and acknowledged the support of President Muhammadu Buhari, Nigerians as well as international organizations in the fight against the insurgency, adding that terrorism is a global problem that must be tackled to enable development thrive in the continent. He promised to accomplish the task of President Muhammadu Buhari, to ensure normalcy returns to the North East.

The COAS urged all African youths to focus on their studies, adding that it is the basis for the overall socio-economic development of the African continent.

He also urged them to always respect elders, constituted authorities and contribute positively in order to change Africa for the better.

Present during the investiture were some Principal Staff Officers of the Army headquarters, Corps Commanders and Directors, as well as members of the All African Students Union delegation.