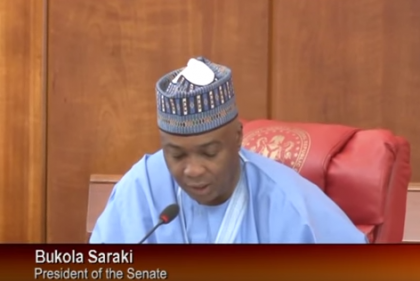 Yusuph Olaniyonu, Abuja;
President of the Senate, Dr. Abubakar Bukola Saraki, on Saturday stated that the Senate will investigate the severe hunger and nutrition crisis in the IDP camps in the North East. Last Thursday,  hundreds of women from camps in Borno State took to peaceful protest and barricaded the Maiduguri-Kano/Jos Road.
While reacting to the protest, Saraki described the development as desperate and reiterated his calls for better coordination amongst government and international aid agencies. He again emphasised the need for Nigeria to quickly operationalise a more effective and efficient humanitarian response infrastructure to address the dire situation.
“It is important that we all focus on eliminating the coordination, access and food supply issues hindering us from successfully feeding the millions of IDPs. This is particularly important for the many children who are dying daily from starvation. It should break every Nigerians heart to know that our own women and children are enduring such horrendous hardships”, he stated.
The Senate President further called on the  Police, the Economic and Financial Crimes Commission (EFCC) and other law enforcement agencies to quickly move to investigate the diversion of food aid deliveries, stressing that government officials and contractors should be held to account for how truckloads of provisions intended for the IDP camps mysteriously went missing.
“Anyone that is found to be diverting the food aid deliveries should be investigated and brought to book if investigations prove their participation in these vicious schemes. Profiting from a complex humanitarian crisis is unacceptable. The people of the North East have suffered enough indignities in the past four years from the marauding Boko Haram terrorists. Stealing food meant for starving children is beyond the pale and only adds insult to injury”, Saraki stated.
Saraki had recently called for an International Summit on the North East – similar to the one held in London for Syria which raised about $10 million.  He also plans to offer a motion on the situation in the North East when the Senate reconvenes from recess next month.
The motion specifically calls for the establishment of a Senate Ad-Hoc Committee on the North East. Additionally, the motion will call for the conduct of a public hearing for the purpose of the Senate to use its oversight powers to review Nigeria’s humanitarian policies, better understand the current humanitarian coordination infrastructure and hear testimony from witnesses representing the government, humanitarian experts and the IDPs themselves.
“The situation in the North East has been underreported and under resourced for far too many years. In terms of scale and complexity, the situation in the North East is more dire than South Sudan. Yet, apparently the crisis appears not to be sexy or star-studded enough to attract greater international attention and support”, he stated.