Kidnappers of an Indian Expatriate In Katsina Ala, Benue State Arrested 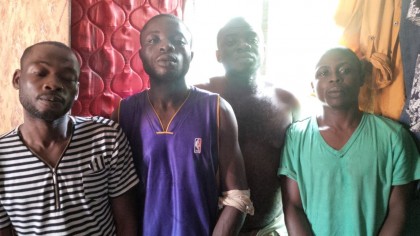 Nigeria police says it has arrested gang of kidnappers and armed bandits that have been terrorizing Benue state and its environs. The police spokesperson  DCP Don N. Awunah, fsi made this known in a statement he released to the press in Abuja.

According to him, during interrogation, they confessed to be behind several kidnappings and armed robbery attacks on innocent people in Benue State including the kidnap of an Indian expatriate, the kidnap of one Mr. Charles a business man at Adikpo, Kwande LGA and the kidnap of a prominent chief Tsegba in Gboko and the collection of a ransom of Five Million (5,000,000) naira ransom paid to them before his release. They also confessed to the kidnappings of several lecturers and businessmen in College of Education Katsina Ala and other neighbouring towns. However, investigation is being intensified to arrest other members of the gang still at large. All suspects will be arraigned in court on completion of the investigation.