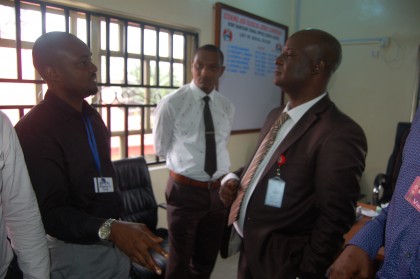 Wilson Uwujaren, Abuja: The Economic and Financial Crimes Commission, has called on youths all over the country to shun acts of corruption, criminality and militancy.

EFCC’s Zonal Head in the South-South, Mr. Ishaq Salihu made the call in Port Harcourt last week while receiving officials of the National Patriotic Forum of Nigeria, PATFON. Salhu observed that, corruption was responsible for the low living standard of many Nigerians and urged youths to team up with the EFCC in the fight against the menace.

“Say no to crime, criminality and militancy. If there is no criminality, then you can walk the street freely, he said.”

He also challenged the youths to always report any act of criminality within their communities or neighborhood in order to make Nigeria a safe place for all.

Salihu commended PATFON for its roles in mobilizing youths across the country for positive engagements and assured the group that the EFCC will remain unyielding in its efforts to curb corruption, money laundering and other forms of economic and financial crimes.

In his speech, the national coordinator of PATFON, Engr. Stephen Graville called for synergy between PATFON and the EFCC in the areas of value reorientation and enlightenment. The coordinator lamented the decadence in our value system and the lack of patriotism among the youths “Our youths are no longer patriotic. PATFON has various responsibilities in seeking to add value to our country”.

According to him, to enhance the moral values of Nigerians, there is the need to raise a campaign for uprightness, volunteerism and patriotism. “One of our cardinal objective is to build the attitude which is the character and the aptitude which the skills and capacity of the Nigerian youths’’.