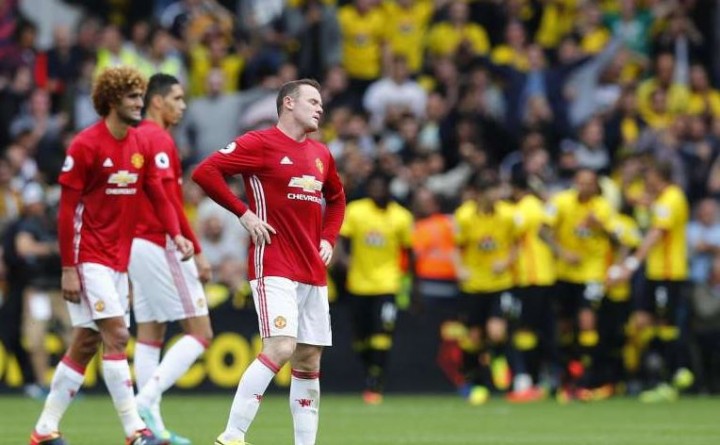 Manchester United lost their third consecutive game under the leadership of Jose Mourinho in a week with a 3-1 loss to Watford in the English Premiership League match.

Etienne Capoue put Watford ahead with his fourth goal of the season, but Marcus Rashford – handed his first Premier League start of the campaign – equalised after the break.

Rashford’s goal could not prevent United from suffering yet another defeat, after their first EPL loss of the season inflected by Manchester City and UEFA Europa League loss to Feyenoord.

Zuniga capping a great team move just moments after coming on and Deeney putting the icing on the cake from the spot.

The breakthrough came at the other end in the 34th minute when Martial – who had previously received a nasty knock to the head – was dispossessed by Miguel Britos in a dangerous area, with referee Michael Oliver ignoring United claims for a foul.

That allowed Daryl Janmaat to race clear down the right and cut back for Capoue to beat De Gea with a low, first-time finish and the visitors’ misery was compounded by a stricken Martial having to be replaced by Ashley Young immediately after the goal.

United struck back in the 62nd minute, when Rashford was involved in the build-up – playing a one-two with Ibrahimovic – and when the Swede’s cross deflected off Valon Behrami, the 18-year-old pounced to direct his shot under Heurelho Gomes from three yards out.

A slick Watford passing sequence saw Nordin Amrabat and Roberto Pereyra combine to set up Zuniga and he swept home on 83 minutes.

They were not done there either, with another substitute – Isaac Success – helping Zuniga to win a penalty under Fellaini’s challenge in stoppage-time.

Deeney took it and powered home to delight the Vicarage Road crowd as the home side snapped a nine-game losing streak in league matches against United.