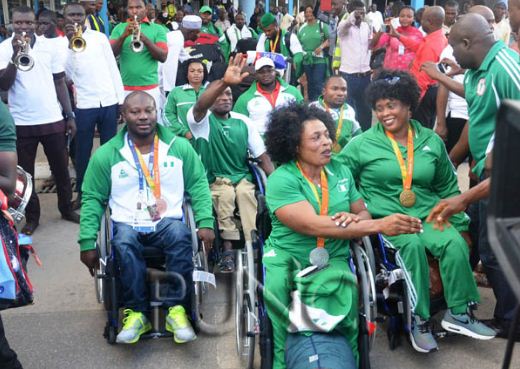 Fans in hundreds turn out on Sunday at the Nnamdi Azikiwe Airport in Abuja to welcome the first batch of victorious 2016 Rio Paralympics athletes from Brazil.

Team Nigeria to the Paralympics Games won 12 medals in Rio at the end of the games on Sunday.

The acting Permanent Secretary of the Ministry of Youths and Sports, Luka Jonathan,  Received the athletes on arrival and congratulated them for making the country proud and for putting the nation on top of other African countries on the medals table.

“Today is a wonderful day the Lord has made that we should rejoice and be glad in it.

“We are celebrating you now because you have done this country proud.” He said.

He hailed the victorious Paralympic team for making history in the games.

The Ministry promised the athletes that there would be a proper reception for the them the remaining contingent return to the country.

The Assistant Captain of the team and a silver medallist in power-lifting, Esther Oyema, thanked the government and the people of Nigeria for their support and prayers.

She thanked Nigerians for the reception at the airport, saying such had never happened before.

Oyema said the team was able to win medals because the members were determined to make the country proud.

He called on government to reward them by doing something that would better their lives.