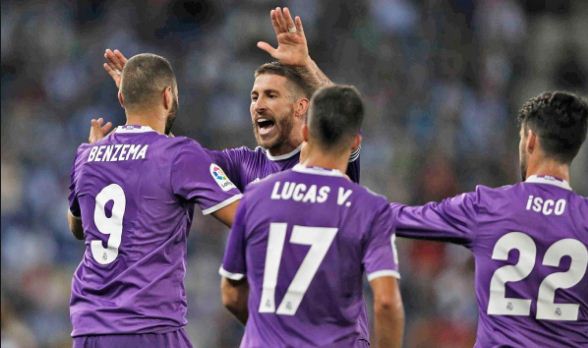 Real Madrid set a new record in the Spanish La Liga by equalling 16th consecutive win in Spain’s top division and moved three points clear at the top of La Liga after beating Espanyol on Sunday for a record.

The club manager, Zinedine Zidane praised the goals from James Rodriguez and Karim Benzema that gave them the win that matches the run of Pep Guardiola’s FC Barcelona side in the 2010/2011 season.

Gareth Bale and Cristiano Ronaldo were left out of the game that made it four wins from four this season for Madrid.

Wales forward Bale picked up a hip problem in the 2-1 Champions League win at Sporting Lisbon on Wednesday, while Portuguese star Ronaldo was ruled out with flu.

Colombia forward James Rodriguez stepped up on his first apperance of the season with a superb solo effort at the break of the first-half , scoring Real’s opener.

Receiving the ball from Toni Kroos 30 yards from goal, Rodriguez rode two challenges before unleashing a low shot past Diego Lopez into the bottom corner.

Benzema opened his account for the season and doubled Real’s lead on 70th minute, meeting Lucas Vazquez’s low cross for a simple tap-in from close range.

The win maintains Real’s unbeaten start to the season and puts them on 12 points, ahead of FC Barcelona and Las Palmas on nine.