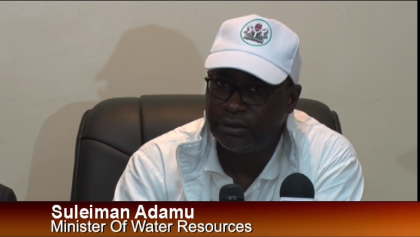 Minister of Water Resources, Suleiman Adamu says there’s no going back on the Ministry’s commitment to supporting the Government’s Agriculture Development Policy.

The Minister said this in a message to the flag-off of the second graduates/youth empowerment scheme in Abeokuta, Ogun State Capital.

Since the federal government signed a public-private partnership agreement with Songhai integrated farms barely 4 months ago, the goal is being pursued vigorously.

The objective is to reposition and strengthen the River Basin Development Authorities, RBDAS to become major economic nerve-centers to support the economic diversification policy of the government.

Part of the agreement is to empower about 1200 graduates across the country through the graduates/youths empowerment scheme.

After the inaugural flag off in Kogi State, water resources ministry continues the process with the flag-off of the second scheme in Ogun State under the Ogun-Osun River Basin Development Authority.

The selected graduates will be trained in fishery, poultry and crops production.

According to the Ministry, the farm schemes which would be spread across the country would help to enhance the capacity of the RBDAS to complement rural infrastructure and advance agricultural support services.