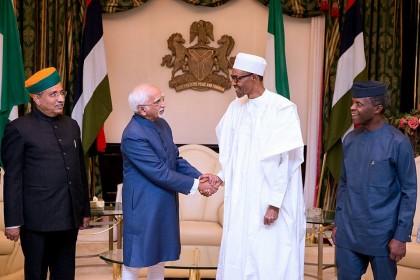 Laolu Akande, Abuja: The governments of Nigeria and India would be reactivating the Nigeria-India Joint Commission earlier set up to foster deepened relationship and expanded economic interaction between the two countries.

This was the highlight of the bilateral meeting earlier today at the Presidential Villa between the visiting Indian Vice President, Honorable M. Hamid Ansari and Nigeria’s Vice President, Professor Yemi Osinbajo, SAN.

The Nigeria-India Joint Commission which was first set up in 1979, and was revived during former President Olusegun Obasanjo’s administration met last about 5 years ago. But both Vice Presidents in their discussions today called for a reactivation.

Prof. Osinbajo added that the Commission provides a veritable way forward to work out the different areas of collaboration discussed at the close-door bilateral talks. Issued discussed ranged from economic relations, peace and security, consular matters and regional & international issues.

In his opening remarks at the talks, Vice President Osinbajo stated that both countries should also focus on the outcome of the 3rd India-Africa Summit held last year, disclosing that Nigeria “will take an active part in the elaboration of the Programme of Action.” He also called for the setting up of a Joint Implementation Committee to pursue the commitments of that summit.

Observing that India has recorded “remarkable advancement,” in science and technology, including in space research, Vice President Osinbajo added that Nigeria is committed to playing a more active role in the evolution of the International Solar Alliance launched by the Indian Government last year with a view to benefiting from its operations for Nigeria’s own quest for alternative sources of energy.

In his own remarks the Indian Vice President, who is also the head of the country’s upper legislative chamber-Rajya Sabha- (also known as the Council of States) said he was delighted to be in the “beautiful city of Abuja and congratulated the country on last year’s free and fair elections. He said the Nigerian people “deserve praise for coming out to vote and ensuring that democratic values take root in Nigeria.”

Vice President Ansari commended President Muhammadu Buhari for effectively tackling the challenges of the country including Boko Haram. He noted that the Nigerian government was taking steps to minimize the impact of the challenges.

The Indian Vice President who had earlier paid a courtesy call on President Buhari accompanied by VP Osinbajo concluded by saying “our friendship is a source of great pride to us, our destinies are so inter-linked and we are confident that our discussions today will strengthen our strategic relationship.”

The meeting also featured the signing of a Memorandum of Understanding on Product Standardization and a Letter of Intent to conclude agreements on a number of diplomatic issues including Customs Cooperation, Prisoner Transfer, Renewable Energy, and Visa issues.

Several ministers from the Nigerian Federal Executive Council attended the bilateral meeting alongside the Indian delegation that included Members of Parliament.