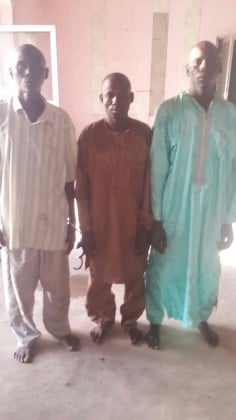 The suspects include Abba Go Dallagio, Abba Fanned and Alhaji Nwariye. During preliminary investigation they claimed that they entered into Maiduguri through Mafa with about 200 cows for sale at Maiduguri cattle market.

The suspects further stated that they are part of logistics elements of the Boko Haram terrorists group that assist in selling cows for the insurgents.

They further added that proceeds are remitted to the terrorists to fund their nefarious activities. So far, troops have identified and isolated 23 cows at the cattle market.

Similarly, one of their agent and spy at the market, Alhaji Ajid Umar, has also been arrested. A total of 170 cows were isolated in connection with him. All the suspects are in undergoing preliminary investigation.