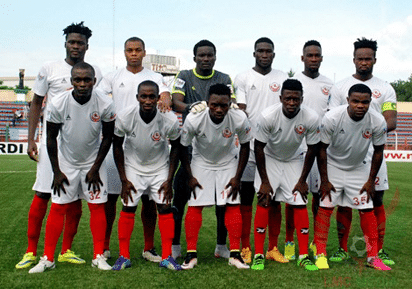 Four goals to nil is some kind of way to end your long season and officially onward crowned as the league champions. Rangers striker, Egbuchulam scored a hat trick and Okoro scored to give Rangers 4-0 against El-Kanemi Warriors and win their first league title in 32 years.

The Rangers, Flying Antelopes as they are fondly called amassed a total of 63 points from 38 games to end the season first among other 19 competing clubs.

Rangers International Football Club of Enugu popularly called Enugu Rangers is one of only two Nigerian division one football teams (along with Heartland) that has never been relegated. They also provided the bulk of players to the then Green Eagles, like giant goalkeeper Emma Okala, skipper Christian Chukwu, Aloysius Atuegbu and Ifeanyi Onyedika. Other former stars include Michael Emenalo, now at Chelsea of England, Augustine ‘Jay-Jay’ Okocha, Onyekachi Apam, Edward Ofere and Joseph Enakarhire.

After full time whistle sounded from the center referee Ferdinand Udoh’s around Nnamdi Azikwe Stadium and it sunk in that Rangers had won their first Nigeria topflight title after 32-years. It followed with Twitter exploded and it felt like Nigeria not Enugu took to the social media platform to congratulate them for well deserved win. 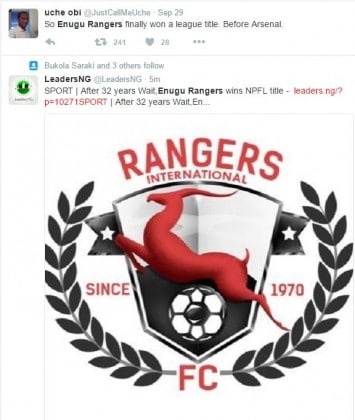