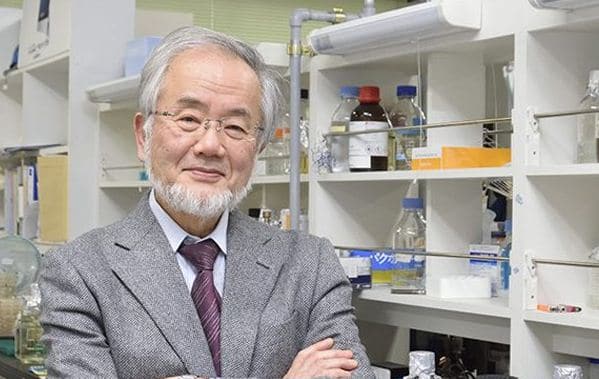 Japanese microbiologist Yoshinori Ohsumi has won the 2016 Nobel Prize in physiology or medicine for his work in cell autophagy.

Ohsumi, 71, of the Tokyo Institute of Technology was on Monday awarded with the Nobel Prize for his discovery of the mechanisms that allow cells to break down and recycle unwanted components.

The concept was first studied closely in the 1960s, when cells were observed destroying their own contents by enclosing the item in a form of sack and then transporting it to a recycling unit known as the lysosome for destruction.

“Difficulties in studying the phenomenon meant that little was known until, in a series of brilliant experiments in the early 1990’s, Yoshinori Ohsumi used baker’s yeast to identify genes essential for autophagy,” the Nobel committee said in its citation.

“He then went on to elucidate the underlying mechanisms for autophagy in yeast and showed that similar sophisticated machinery is used in our cells.”

It said his work led to understanding of the “fundamental importance” of autophagy in many physiological processes, such as in the adaptation to starvation or response to infection.

He is the 25th Japanese to win a Nobel Prize, including those who later obtained non-Japanese citizenship.

In March last year, Ohsumi was awarded a 2015 Canada Gairdner International Award, also for his work on autophagy. He won a prize of 100,000 Canadian dollars (¥9.6 million yen).

Omura, a professor emeritus of Tokyo’s Kitasato University, shared the honor with William C. Campbell of Drew University in New Jersey and Youyou Tu of the China Academy of Traditional Chinese Medicine.

The Nobel committee honored Omura and Campbell for their work on a drug that has led to sharply lower incidences of river blindness and lymphatic filiarisis, commonly known as elephantiasis.

Tu was honored for her work on artemisinin, a drug that has reduced malaria mortality.

The 2016 Nobel prize season continues this week and next with other science awards and those for peace, literature and economics being awarded.

Predicting the winners is a game of chance — fans of Japanese pop author Haruki Murakami have routinely had their expectations dashed — and the selection process is nothing if not opaque.

Shortlists are never released. Nominees only become known if their supporters announce their submissions.

In 2011, while working as a visiting professor at Karolinska, Macchiarini soared to fame for inserting the first synthetic trachea, or windpipe, using patients’ stem cells.

His work was initially hailed as a game-changer for transplant medicine. But two patients died and a third was left severely ill.

Allegations ensued that the risky procedure had been carried out on at least one individual who had not, at the time, been critically ill, and in 2014 several surgeons at Karolinska filed a complaint alleging that Macchiarini had downplayed the risks of the procedure.

Two members of the Nobel medicine prize assembly were forced to step down in September over the scandal.

On Friday, attention turns to Oslo, where the prestigious peace prize is awarded.

The Norwegian Nobel Committee has received a record 376 nominations this year, almost a hundred more than the previous record set in 2014.

Those in Europe grappling with the migrant crisis might be a traditional choice for the prize, as would the brokers of two recent accords: the Iranian nuclear accord and the peace deal in Colombia with leftist FARC rebels.

In a shock upset however, Colombian voters rejected the peace deal by a razor-thin majority in a referendum on Sunday.