The Minister will interact with women groups and visit the only remaining IDPs camp in the state in Damaturu to especially assess the condition of women and girls.

The Minister revealed that Yobe is one of eight ‘pilot’ states to benefit from a N1.6 billion micro-finance scheme under the National Women Empowerment Programme (NAWEP). She said each of the eight states will get N200 million. She also said the fund is collateral and interest free and is meant to support and empower women. 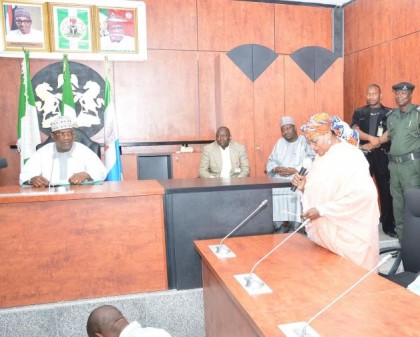 H.E Governor Gaidam described Senator Aisha Alhassan as an ‘advocate for social justice’, saying her effort in improving the life of women is commendable.

The governor also said that the Minister “may be pleased to note that the present administration in Yobe State also regards the empowerment of women a top priority. In pursuit of this objective, and as a demonstration of our commitment to empower the women folk, loans to the tune of N178 million were disbursed through the Ministry of Women Affairs to 17,800 women in 178 wards of the 17 Local Government areas of the State. Furthermore, women have also been trained at the Women Development Centre, Damaturu. This has enabled them to acquire the necessary skills and specialized in various trades such as knitting, tailoring and soap/pomade making among others aimed at making them to be self reliant. In this regard, a total of 108 women have been trained between 2015 to 2016.

“The State Government has also reactivated all the Women Development Centres in the 17 Local Government Areas of the State. Consequently, skill acquisition materials worth N34 million have been procured and distributed to the centres. Government has also renovated 5 mini cottage industries located at Goniri, Damagum, Bizi, Amshi and Nangere. Similarly, Vegetable Cottage Industry constructed by the Federal Ministry of Women Affairs and handed over to the State Ministry of Women Affairs has also been reactivated”, he said.

The governor added that “as a further demonstration of our commitment to alleviate poverty, Government has expended the sum of over N98 million on women empowerment materials which include 400 sewing machines, 200 knitting machines, 400 Local noodle machines, 100 Mini grinding machines and 50 Deep Freezers among others and distributed them to 1200 beneficiaries. Furthermore, a loan package has been disbursed to 1510 women to enable them embark on Poultry production, Ruminant breeding as well as support to widows. Our august visitor may wish to note that we have waived 50% of the loan amount as subsidy to all categories of the beneficiaries except widows who were given 100% waiver of the total amount”.