Hurricane Matthew Heads For The US After Hitting Haiti & Cuba 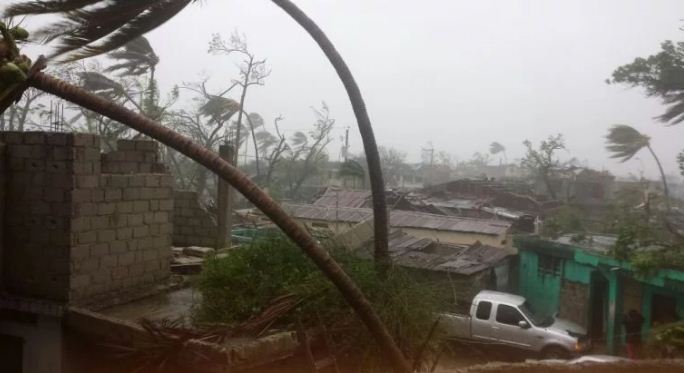 Hurricane Matthew, a raging Caribbean storm in almost a decade,  has hit Haiti and Cuba and heading towards the Bahamas and the U.S. coast early on Wednesday after battering Haiti and Cuba with torrential rain, wreaking havoc among the struggling Haitian population.

According to Reuters reports, the hurricane hit Cuba and Haiti with 140 mile-per-hour (230 kph) winds on Tuesday, striked towns, farmland and resorts.

Predicted by the United Nations (UN), has the worst humanitarian crisis to hit Haiti after the devastating earthquake that struck the country in 2010 and killed more than 200,000 people, hundreds of thousands of people were evacuated from the storm, which caused severe flooding and killed four people in Dominican Republic as well as at least two in Haiti, the two countries that share the island of Hispaniola.

Haiti as tens of thousands of people still living in tents and makeshift dwellings due to the 2010 earthquake and this has raised great concerns over humanitarian crisis that could be more than the one experienced in 2010.

Making it harder to assess the severity of the impact on Haiti, Matthew knocked out communications in many of the worst-affected areas, including the main bridge that links much of the country to the southwest peninsula.

Reuters quoted Mourad Wahba, the U.N. Secretary-General’s Deputy Special Representative for Haiti: “much of the population” had been displaced by Matthew and at least 10,000 were in shelter.

“Haiti is facing the largest humanitarian event witnessed since the earthquake six years ago,” he said.

Heifer International, a nonprofit organization working with farming families in Haiti, said farmland and businesses caught in Matthew’s path had been devastated by the storm.

The U.S. government said it was ready to help the afflicted and around 300 U.S. Marines set off on the USS Mesa Verde to provide disaster relief in Haiti, the Marines said in a tweet.

Cuba’s government has traditionally made extensive efforts to cope with hurricanes, and authorities spent days organizing volunteers to get residents to safety and secure property.

Blowing sustained winds of 125 miles-per-hour (201 kph) by early Wednesday according to the NHC, Matthew thrashed the tourist town of Baracoa in the province of Guantanamo, passing close to the disputed U.S. Naval base and military prison.

The U.S. Navy ordered 700 spouses and children along with 65 pets of service personnel evacuated as the storm approached.

The eye of the storm was about 35 miles (56 km) north-northwest of the eastern tip of Cuba early on Wednesday, and Matthew is expected to be very near the east coast of Florida by Thursday evening after moving through the Bahamas, the NHC said.

Officials in the Bahamas urged residents to evacuate to higher ground, and the Ministry for Grand Bahama said on Facebook that government offices in New Providence and Grand Bahama had been closed on Tuesday until further notice.

NHC issued warning of the tropical storm or hurricane for some parts of Florida and added that conditions could affect parts of Georgia, South Carolina, and North Carolina later this week, even if the center of Matthew remained offshore.

The National Weather Service said the threat to life and property was high, predicting winds of up to 70 mph (115 kph) and 4 inches (10 cm) of rain for parts of Florida.

Reuters say, Nikki Haley, the governor of South Carolina, declared a state of emergency, and ordered the evacuation of more than 1 million people from Wednesday afternoon.