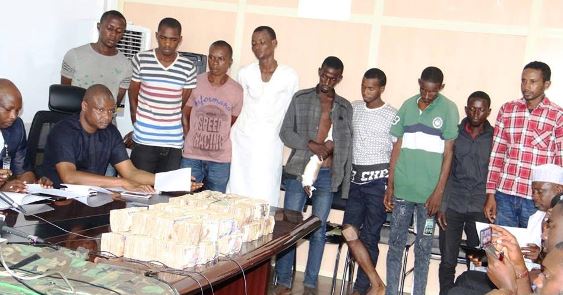 The Nigeria Police Force has paraded suspects in connection with the kidnap of Mrs Margret Emiefele, wife to the CBN governor. The Police paraded the arrested suspects on Monday at the Police Force Public Relations Officer’s conference hall at the Force Headquarters in Abuja during a press briefing.

The Force Public Relation Officer, DCP. Don N. Awunah, said that in the wake of the crime, the Inspector General of Police (IGP), Ibrahim K. Idris  had ordered the Intelligence Response Team (IRT) and other tactical teams to swing into action to rescue Mrs. Margret Emiefele, the wife of the Central Bank Governor unhurt and apprehend all those remotely or directly responsible for the dastardly act.

“It will be recalled that Mrs Margret Emiefele and three of her aides were abducted on 29/9/2016 at Oquneki Hills along Benin-Agbor road, in Delta State.

“Consequent upon deployment of Intelligence Platform, Mrs. Emiefele and her aides were rescued on 30/9/ 2016 unhurt and they have since been reunited with their families after debriefing.” He added.

Awunah listed the names of the suspect and some exhibits recovered from them during the operation.

NA/65/7115 LANCE CORPORAL MUSA MAIDABARA: The suspect is a   30 year old native of Katau Village in Billiri LGA of Gombe State. A Lance corporal with the Nigerian Army serving at 122D30 Regiment in Maiduguri, Borno State, he was arrested for the active role he played in the kidnap. Upon his arrest, he made a confessional statement to the Police admitting to be part of the gang that kidnapped and collected ransom from the victim’s family. In the course of investigation into the crime, a Jeep worth one million five hundred thousand naira and a sum of four million naira which was his own share of the ransom money was recovered from his possession. It was also discovered that he, in company of NA/65/6582 Lance Corporal Edwin George and one Ernest Anthony Uduefe, a dismissed soldier, while dressed in Army Uniform, escorted some of the kidnappers and the ransom money in a maroon colour Audi car out of the forest where they had kept the victim, to Benin City, Edo State.

NA/65/6582 LANCE CORPORAL EDWIN GEORGE: A native of Otukpo town, Otukpo LGA of Benue State. He is personnel of the Nigerian Army serving at 122D Regiment in Maiduguri, Borno State. As earlier mentioned, he was part of the trio that escorted the ransom money to Benin City Edo State. A Honda car worth one million one hundred thousand naira (1,100,000) which he used part of his loot to purchase was recovered from him. The suspect was arrested on 05/10/2016 at about 1300hrs in his home town.

ERNEST ANTHONY UDUEFE:  The suspect is 32 years old, he is a native of Igbuku village, Ndokwa East LGA of Delta State. He also volunteered a confessional statement to his involvement in the crime. Investigation revealed that he also bought a Honda car worth one million five hundred thousand naira (1,500,000) and furnished an apartment in Benin City Edo State within 48hrs of the kidnap incident. The sum of one million five hundred thousand naira in cash and the said Honda car was recovered from him.

MOHAMMED ABUBAKAR A.K.A DOGO: The suspect is 30 years of age. He is a native of Mubi town, in Mubi LGA of Adamawa State and the leader of the group. He confessed to the crime and admitted that he received the sum of eleven million naira (11,000,000) in cash from the ransom paid. The suspect however, claimed to have given one Danjuma who is presently on the run, the said sum to keep for him.

MOHAMMED MUSA: The suspect is 26 years old and hails from Yabo LGA of Sokoto State. He also volunteered a confessional statement admitting that he is a member of the gang and also, that he received the sum of ten million naira (10,000,000) from the ransom paid. He sustained bullet wounds after a gun duel with the Police while trying to leave the forest where they had kept the victim. The cash sum of seven million seven hundred thousand naira (7, 700,000) was recovered from him. Useful information was gotten from him that led to the arrest of other gang members.

MOHAMMED SULE: He is 26 years old and a native of Awe village in Awe LGA of Nasarawa State. The suspect confessed to have received ten million naira (10,000,000) in cash as part of his share of ransom paid and claimed a soldier and a gang leader escaped with the loot.

IBRAHIM ABDULLAHI: He is a 30 year old native of Fondogeri LGA of Niger State. He admitted to have received ten million naira (10,000,000) in cash as part of his share of the ransom money.

ALIYU MUSA AND MOHAMMED YUSUF: 29 year old Aliyu Musa and 36 year old Mohammed Yusuf were arrested for their involvement in the kidnap incident based on information availed the Police by Mohammed Musa one of the aforementioned suspects. They are being investigated further on the roles played by the two in the commission of the crime.

The Police PRO said that the Force will continue to limit the capacity of kidnappers and other criminals who want to disrupt the quality of life of Nigerians by the deployment of adequate manpower and resources in crime reduction, detection and effective prosecution of offenders in courts of competent jurisdiction.

ALSO READ: Two Kidnappers Arrested In Zaria After A Tip Off and Long Chase

According to him, the curtailment of the activities of kidnappers in our communities will be ultimately successful through the cooperation and collaboration of all stakeholders and that there must be a collective ownership of law enforcement to achieve it.

“It is instructive to mention that money or ‘ransom’ is sometimes used as a bait or bargaining chip to save the lives of the victims of crime which is primary to security operatives.

“It is also absolutely important to mention that the Police do not and will not encourage payment of ransom.

“The relatives of victims of kidnap for ransom are strongly advised to exercise considerable caution to succumb in payment of ransom.

“It is inherently counterproductive. At all times of kidnap scenario, it is pertinent the Police are involved and trusted.” He Added.