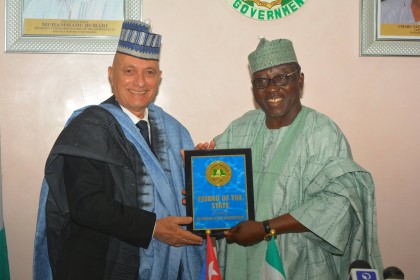 His Excellency Umaru Tanko Almakura has lauded the Cuban Government for its firm stand on health related issues and expressed the readiness of Nasarawa State to partner Cuba in the areas of healthcare and agriculture.

Governor Almakura made this known when he received the Cuban Ambassador Carlos Trejo-Sosa who was in the state for a courtesy visit and discussions on various issues at the Government House Lafia.

Speaking on the healthcare collaboration the Governor stated it would have a more positive approach if a research and diagnostic laboratory is set up in Nasarawa State , saying that such an effort would go a long way in stemming the tide of Lasa fever among other diseases.

Governor Almakura made it known that aside, the collaboration in health we welcome support towards strengthening the capacity of the Primary Health Care Centers in Nasarawa State through improving the capacity of some categories of health care providers.

Lastly, he called on the Cuban Government to explore the Agricultural potentials of Nasarawa State. 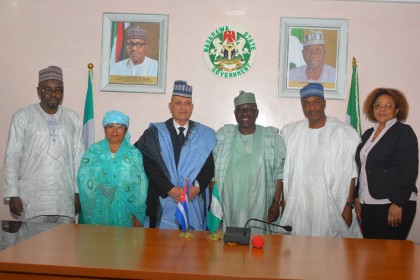 Underscoring the links between Cuba and Nigeria, Cuban Ambassador to Nigeria Carlos Trejo-Sosa affirmed his country’s readiness to share the potentials with Nigeria.

He explained that the visit to the state was meant to synergies with the state government in health and human capacity building.

To this effect, the Cuban envoy told the governor that “Cuba was willing to intervene in the eradication of Malaria, Lasa fever, Hepatitis, diabetes, and cancer.”

As a mark of honor, Ambassador, Carlos Trejo-Sosa and his wife were dressed in cultural attire by Governor Umaru Tanko Almakura.

In other development, the governor assured that his administration will fast-track the constitution of sports associations as well as some key facilities that would stimulate private sector participation and collaboration.