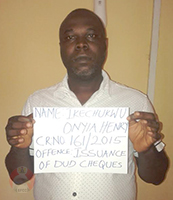 Wilson Ujuwaren, Abuja: The EFCC has arraigned one Ikechukwu Onyia Henry before Hon. Justice. C.O. Ajah of the State High Court Enugu, Enugu State on four count charge bordering on Obtaining Money by False Pretences and issuance of dud cheques to the tune of N4, 500.000.00 (Four million five hundred thousand naira) contrary to section 1(2)(b) of the Dishonored Cheques (offences)Act, Cap D11, Laws of the Federation, 2004 and punishable under section 1(1)(b)(i) of the same Act.

It was alleged in a petition to the Commission that the suspect, a former staff of EMEL group of companies Lagos and a self-styled importer of baby diapers in January 2015, approached the petitioner for a loan of N3, 000,000.00 (Three Million Naira) to increase importation of his stocks with an agreement to pay an interest of N1, 500.000.00 (One Million Five Hundred Thousand Naira) in return for the capital sum.

The investigation, however, revealed that the transaction was fraudulently entered into by the accused solely to use the loan obtained to offset debts incurred from his former office which led to his dismissal. It was also discovered that his company Alteal Enterprises was nonfunctional and without any presence in the registered address. The case has been adjourned to 7th November 2016 for trial.