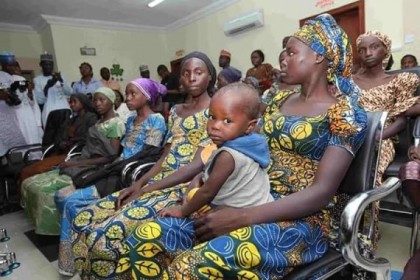 Q&A By the Presidency Office of Digital Engagement (PODE)

Q. Was it a release or a rescue?

Ans. The girls were released by Boko Haram to the Department of State Services (DSS) following negotiations brokered by the Swiss Government. Kindly note that the Red Cross was not involved in the negotiations; their role was limited to providing medical care at some point during the handover of the girls.

Q. How many girls were released, and when?

Ans. 21 of the girls were released, safely, to the Department of State Services (DSS) at 5.30 this morning, Thursday October 13, 2016, and they were flown to Kaduna from the location of their release.

Q. Where are the girls currently?

Ans. The 21 girls are being held in a secure medical facility in Abuja, with access to a team of medical doctors, psychologists, social workers and trauma experts. Their physical and psychological wellbeing is and continues to be the utmost priority of the Federal Government.

Q. There are reports that several of the girls are nursing mothers. Is this true?

Ans. Those reports are false. Only ONE (1) of the 21 girls is a nursing mother, with a child under the age of 2.

Q. Was any ransom paid for the girls?

Q. Were the girls swapped for Boko Haram fighters?

Ans. No. No Boko Haram fighters were swapped or released for the girls. All reports suggesting that a swap took place are false and should be disregarded.

Please note that the Government has no reason to conceal a swap, if indeed it took place, considering that the President has repeatedly stated his readiness to swap fighters for the girls, if necessary.

But no swap took place. The release is the product of painstaking negotiations and the building of trust on both sides.

Q. So how did the release happen?

Ans. The Federal Government has, since the Buhari administration took office, been working on the safe release of the girls and following all the leads available. In this instance, as soon as we had a credible lead, Mr. President gave the green-light to the DSS to pursue it. We can confirm that the DSS pursued the lead in collaboration with the Government of Switzerland. The DSS was supported by the military. As soon as the necessary confidence was built on both sides, the parties agreed on the date and the location of the release of the 21 girls.

Q. Have the girls’ families been contacted?

Yes, the parents and families of all the girls have been contacted, and arrangements are already being made to reunite them with the girls.

Ans. What’s the next step regarding the released girls?

They will be given appropriate and comprehensive medical and psychological care and support. The Federal Government will underwrite all of the care they will receive, as well as their educational ambitions. The ultimate goal is to reunite them with their families, reintegrate them into the society, and support them to achieve their personal, educational, and professional goals and ambitions.

Q. What about the close to 200 Chibok girls still being held by Boko Haram?

Ans. We see this as a credible first step in the eventual release of all the Chibok Girls in captivity. It is also a major step in confidence-building between us as a government and the Boko Haram leadership, on the issue of the release of the Chibok Girls.

Q. What message does the Federal Government have for Nigerians?

Answers to 11 Q&A frequently Asked Question from the general public.