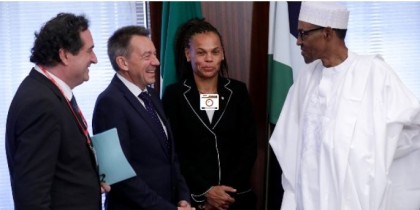 Five days after the release of 21 out of the more than 200 schoolgirls held  captive by Boko Haram, leaders of the International Committee of the Red Cross, who brokered the deal, have arrived in Nigeria.

The ICRC officials led by their President, Mr. Peter Maurer, on Monday met with President Muhammadu Buhari at the Presidential Villa.

The Red Cross, with the collaboration of the Swiss government, brokered the negotiation between a faction of Boko Haram sect with the Federal government of Nigeria.

The negotiation led to the release of 21 of the abducted schoolgirls.

Government hopes that more of the girls would be released as further negotiation continues.

About 276 of the girls were abducted at the Government Girls Secondary School, Chibok in Borno State when they were sitting for their Senior Secondary School Certificate Examination.

At least 57 of the girls escaped and the remainder remained in captivity since 14the April 2016 when they were abducted.