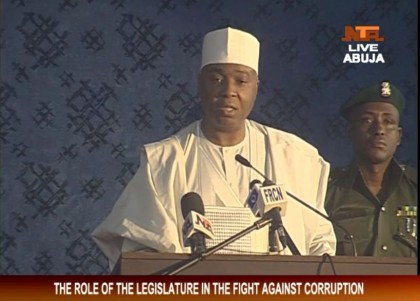 For more than 40 years now, the ‘anti-corruption’ fight has remained a major policy thrust of successive administrations. While this is true, it is also, unfortunately, true that not much traction has been achieved in preventing corruption in our public life. There is no doubt that corruption has significantly impaired our growth and development as a nation. More importantly, it is the poor that are most affected by corruption. This is why the war against corruption must now fight this current war sustainably through systemic solutions.

It is safe to say that we have failed before, for various reasons. Whatever, those reasons are, we cannot afford to fail again. This time, we must get it right. To lose this opportunity will have untold impact on our history and development. The current initiative must be insulated from being used as a political tool for political witch-hunting. It must not be allowed to be tainted in a manner that suggests selectivity.

In the past, we have seen military juntas cite rampant corruption as a rationale for assuming and holding on to power. We have also witnessed firsthand how past democratic governments have sought to eradicate corruption without much success. In order to succeed, this time, we cannot afford to make the fight against corruption simply a mantra. We cannot also afford to make it a chase in the dark, it must be rooted in effective strategy, demonstrable plan with various layers rooted firmly in the tripods of law, liberty, and neutrality.

As a nation, we still have a long way to go in the fight against corruption. Having tried to solve the problem through spontaneous institutional action, I hereby propose that it is time to adopt a more organized and structure oriented intervention strategy set up with concrete solutions for different strands of the corruption matrix.

We must ask ourselves, what have other nations who have been a success against corruption around the world done to achieve the result they have? What do we need to do differently to achieve better and different result? What is clear is that whatever strategy that is adopted that does not include the following as priority is likely not to lead to a sustainable fight against corruption; these include, transparency in government processes and procurements, reduction in bureaucratic bottlenecks, education, technology adaptation, the adoption and enforcement of sensible rules and reduction of discretions, neutral application of sanctions, capacity building and oversight and monitoring.

All of these must become acculturated in our public life through a conscious and deliberate policy that is well audited and oversight oriented. What this means is that the challenge is not that of the Executive alone neither is the fight against corruption just a matter for EFCC, ICPC, and the other enforcement agencies to contain. It is our collective responsibility.

Over the past year and a half, since we took office at the 8th National Assembly, the Senate through its oversight powers have intervened at all times it has been called upon either through petitions or otherwise, to review the activities, management and administration of ministries, departments, and agencies of the Federal Government. Through our legislative supervision, we have uncovered monumental leakages in the operationalization of the Treasury Single Account regime, which has had the effect of saving the country over 20 billion Naira. In the same vein, the Senate has successfully nipped in the buds the issue of abuse of waivers that has led to a huge loss of revenue for the government. We are currently investigating certain companies that have illegally repatriated upwards of 12 Billion US Dollars out of the Nigerian economy.

The fight against corruption must remain driven by a well articulated and delivered strategy. One that is robust, multifaceted and driven by leadership across all aspect of our political and social systems. It cannot be the fight of one man but rather the vigilance of every one of us in our various sphere of influence. Let me share some of my personal experiences with you to shade light on some of the strategies that I have utilized in the past. In the 7th Assembly, I remember personally leading the charge to expose the corrupt fuel subsidy arrangement that was in place. Through a motion on the Senate floor, the Senate uncovered a mindboggling corruption going on in the federal government subsidy management scheme. This led to the indictment of several individuals and companies who were exploiting the weak institutional structures in the design of the scheme to the detriment of millions of Nigerians to enrich themselves. This motion alone saved the Nigerian government over 500 billion Naira, in the first year and in my opinion, would have saved a whole lot more afterward as a result.

These are just several examples of arms of governments successfully operating within their jurisdictions and mandates to further our collective cause as a nation and bring an end to the pervasive corruption that exists in our society.

Ladies and Gentlemen, one of the reasons government create institutions is to ensure that they act in such manner as best preserves the welfare and security of our people. I believe that institutional integrity and capacity holds the key to sustainable success against corruption. This is so crucial as ordinary Nigerians must be convinced that the problem of curbing corruption is being treated seriously by the government, and not in an opportunistic manner. This is especially so for our public accountability institutions. Therefore, if we must make significant inroad against corruption we must strive to protect our accountability institutions from the virus of political interference no matter how well-meaning they may be. They must be enabled to operate in an atmosphere of political neutrality, efficiency, and fairness as envisaged under the constitution. This in my view means that while these institutions work in collaborative form, there must be a minimal intrusion in the operation decisions and working with our apex institutions — like the EFCC, the ICPC, and the Police Force — that are tasked with ensuring accountability in our affairs.

Additionally, as history has shown, it is not enough to simply round people up forcefully throw them in jail under the guise of a successful anti-corruption fight, as a government and as a people, we must do more on the prevention and perception side of the anti-corruption war.

Perception is key in this fight. The anticorruption drive cannot be undertaken as a media glitz. This is why governments at all levels must work to strengthen the capacity of our agencies to make informed decisions and be inclined towards good knowledge of the law, rigor, and transparency in all their doing. The more open and transparent the process, the less opportunity there will be for abuse of office.

In a similar vein, there is a lot that can be achieved with greater civil engagement. Unless we achieve a wide citizen participation and belief in the fight against corruption, it will continue to be easy to erode successes recorded. This is why I urge sensitization of our community leadership and the wider local communities to join the fight through the denouncement of corrupt individuals and those who normalize dishonesty, bribery and exploitation; and those who clearly live far and above their commensurate earnings. This must be incentivized by government paying workers a living wage.

Ladies and gentlemen, the fight against corruption cannot be fought and won on the basis of the prosecution of offenders alone, a greater effectiveness can be achieved by applying preventive measures across the public spectrum. Such preventive measures must include adequate education, ethical reforms, adaptation of technological support systems for better auditing and public procurement systems that help cover loopholes for corruption. For example,in order to reduce the risk of corruption and increase the effectiveness of public procurements, electronic tenders should be used more widely where possible

On our part, the National Assembly is ready to continue to use its legislative time and authority to reform key areas of our laws that will strengthen our institutions and give a fillip to the anti-corruption campaign. We are working to improve our oversight procedures by making the objectives and recommendations of these activities more open to public participation and feedback.

Additionally, with the Whistleblowers Protection Bill, which is one of our priority bills the National Assembly expect that when the bill is passed into law, it would help create a culture of greater freedom to expose corruption and guarantee the rights of citizens who speak out against corruption. With such laws in place, everyday Nigerians will be empowered to hold the government more accountable, which will, in turn, reduce the waste of public funds, and lead to improvements in the quality of public services.

As we play our part in the legislature, other arms of government must also be determined to do the same. The judiciary on its part must take steps to modernize itself by creating an environment that improves the speed and quality of justice. We are ready to play our role to make this happen. Already, the National Assembly has recently passed a bill increasing the number of judges of the Federal High Court and the Appeal courts to reduce the workload of judges in these courts. We know a lot more needs to happen. For example, it is no longer efficient to see our judges record proceedings of the court in long-hand. The implication of this is that the will of justice is significantly impaired, people’s access to judicial rulings becomes reduced and the resolution of corruption cases negatively impacted.

Ladies and gentlemen, it is no longer acceptable that we are still operating a judicial system where there are conflicting judgments issuing from courts of coordinate jurisdiction over matters similar in fact and in law. In order to further strengthen the anticorruption process, we must join hands together to review these anomalies and strengthen the courts to act judiciously, impartially and fairly at all times.

Finally, I would not end my remarks without commenting on the need for every authority under our constitution to abide by decisions of courts made within the jurisdiction. This is the only way to preserve law and order and maintain the rule of law as an essential ingredient for the survival of our nascent democracy. As emphasized earlier, anti-corruption does not start or end with the ICPC, or the EFCC, the Police or the DSS. This fight is all-encompassing. This fight can only be fought and won by all of us – the people and their government – working in sync and playing our own part in the process within the ambits of our defined powers.

If we are truly serious about building a Nigeria that is free from corruption and its myriad consequences, then we must fight to build a nation of institutions under law. We must work to ensure that there is order in all that we do. Unless there is order, we will not get the right results. Unless the anti-corruption war is underpinned on due process, the respect of the rule of law, and a clear acceptance of the separation of powers – with our Constitution as our guiding law, we will not achieve lasting and sustainable results.

Now, I urge us all irrespective of our party affiliation, religious leaning, to work together to achieve a corruption-free nation that works for all Nigerians regardless of their social and political status.

God bless you all. God bless the Federal Republic of Nigeria.