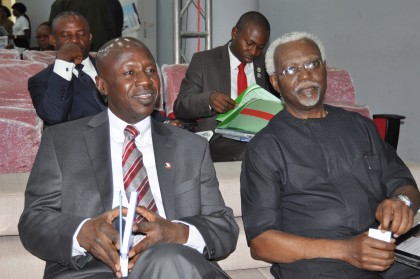 The Federal Government has called for more support from Nigerians for the efforts aimed at recovering stolen funds from persons that looted the nation’s treasury. In a statement by its spokesperson, Wilson Uwujaren said, tThe call was made by the Vice President, Yemi Osinbajo on Tuesday, October 18, 2016, while addressing participants at a 2-day National Conference jointly organized by the Presidential Advisory Committee against Corruption, PACAC and the National Assembly.
The program with the theme, “The Role of the Legislature in the Fight against Corruption in Nigeria” offers a platform for participants to brainstorm on how to tackle corruption in the country.
Declaring the conference open, Osinbajo lamented the state of corruption in Nigeria adding that, “Nigeria stands the risk of perpetually remaining under-developed if nothing is done to stem the tide of corruption.”
He appealed to Nigerians to team up with the Federal Government in its effort to rid the nation of corrupt.
Read Also: 2 Federal High Court Judges Reports To EFCC
Also speaking, the Senate President, Bukola Saraki said the anti-corruption fight embarked upon by the Buhari-led government should not just be a mantra or a tool for political witch-hunt but should be a collective responsibility of everybody to rid the country of impunity and hardship.
He said, “in order to succeed, this time, we cannot afford to make the fight against corruption a simple matter. We cannot afford to make it a chase in the dark. It must be rooted in effective strategy and demonstrative plan.”
Read Also: Money Laundering: EFCC Re-arraigns Nyako, Son, Others for N40bn
In his keynote address, a former Director of the Kenya Anti-Corruption Commission, Patrick Lumumba, recommended severe sanctions to deter corrupt persons.
The Chairman of the Presidential Advisory Committee Against Corruption, Professor Itse Sagay, berated the legislature for its failure to fight corruption just as the Chairman Senate Committee on Anti-corruption and Financial Crimes, Chukwuka Utazi enjoined the stakeholders to aggregate towards institutionalizing preventive mechanisms.
He added that “however, we recognize that prevention is no substitute for sanctions. Every society must deter derelictions. That is why the current focus on investigation, indictment, prosecution and conviction should continue in view of the realities of the Nigerian nation”.
Ibrahim Magu, acting Chairman of the Economic and Financial Crimes Commission, EFCC, who spoke through David Tukura, Deputy Director, Directorate of Planning, Policy, and Statistics, emphasized the need to review certain laws in line with international best practices.
The EFCC boss also advocated for a percentage of assets recovered by the EFCC to be given to the Commission saying, “one of the issues that concern us in the EFCC is the issue of no conviction based recovery. It is of great concern to us, that the burden is on us to prove in court that, this is a proceed of crime, while in other climes the accused has to prove that the property he has, actually represents the fruit of his labour. There is the need for the Act to make a provision for an application of the proceeds of crime into recapitalizing the anti-graft agencies.”
According to him, “in some jurisdictions like the UK proceeds of crime are further used to strengthen the agency. In EFCC, we have been struggling for years to build our Headquarters and when I think of the billions of naira we recover, I can see what would have happened if we are allowed to apply a percentage of this recovery into our operations.”
The two-day conference which ends tomorrow, will among other subjects examine the role of the legislature as the champion of anti-corruption reforms, reform of the anti-corruption legal framework and compliance with international standards.