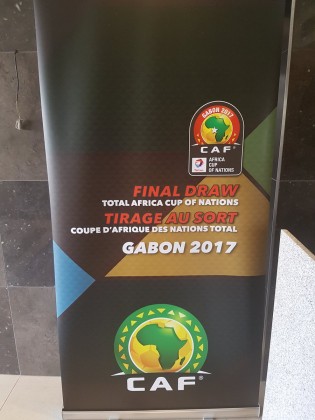 The Gabon 2017 Africa Cup of Nations main event is schedule for another three months, but Wednesday, 18 October 2016, the first ball will be in play in Libreville.

There, in Gabon’s capital, the 16 teams that will contest Africa’s biggest prize in international football will learn their potential opponents and paths to glory.

Happening in Libreville is the draw for the hotel accommodations for the teams participating in the Africa Cup of Nations Gabon 2017.

Guinea-Bissau, the eighth-smallest mainland African nation, experiencing their first-ever qualification, comes at the expense of the Republic of Congo – quarter-finalists last time out in Equatorial Guinea – and Zambia, who were champions in 2013. 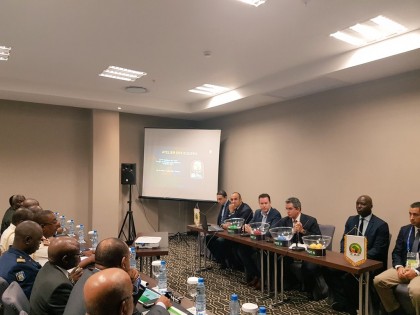 Happening now in Libreville is the draw for the hotel accommodations for the teams participating in the Africa Cup of Nations Gabon 2017. (Photo: CAF)

Now up to 73 in the latest Fifa ranking, above even hosts Gabon, this is a team writing its own story.

Uganda’s Cranes return after a 39-year-absence from the continent’s showpiece.

While this team is a long way from that 1978 side that lost the title decider to Ghana in Accra, in Micho Sredojevic they have one of the continent’s most popular young coaches. The Serb keeps them drilled and organised – only Morocco conceded fewer goals while playing the same number of qualifiers.

Evidenced by their World Cup qualifying draw earlier this month against Ghana, this is perhaps the Pot 4 team most would prefer to avoid. Short on outright talent, long on belief and unity, they will be a dangerous proposition, or at the very least a banana peel for the more established sides.

The likes of Algeria, Ghana and the Cote d’Ivoire of course are the establishment, the big game on the continent, but they all go into the draw with significant questions surrounding their ambitions. None more so than Algeria, who only a week ago dispensed with former Ghana coach Milovan Rajevac.

His sack/resignation  was ostensibly due to a dressing room falling-out, with players not confident in Rajevac’s methods and style.

It will be interesting to see what approach Algeria take with respect to the Afcon; they have not won it since 1990, but have on their hands their most talented generation of players.

Ghana themselves face a managerial conundrum, but at least still have Avram Grant on duty. The 61-year-old may have led the Black Stars to the final last time, but his dour, risk-averse style has begun to grate, and has done nothing to coax the support of an increasingly disillusioned fanbase.

If he still has a job come January, the Afcon may well be his last chance to win over his doubters, and a kind draw would obviously be to his advantage.

The Ivorians are the reigning champions, but Michel Dussuyer has not always seemed the right fit for a team that is somewhat in transition.

They won one of four qualifiers (two of six, if you count the “friendlies” against Gabon), and that in a group with Sudan and Sierra Leone.

It is hard to know what to expect from the Elephants, and there will be sterner examinations of their project in Gabon.

The feeling persists that one of this trio will underwhelm, and if they do, the stage is set for Egypt to make a grand return to the stage. No African nation has navigated AFCON better historically, but since their seventh title in 2010, the Pharaohs have been missing in action. Back where they belong now, they have the talent to make it seem like they never left.

They also have, in Hector Cuper, a manager of great experience. That said, it will be the first time Egypt contest Afcon with a foreign manager, and for all their strength in qualifiers, the rarefied atmosphere of tournament football is a whole other test.

Their seeding in Pot 3 also places them in harm’s way, but it could have been a lot worse, had they slipped behind Togo in seeding points. The prospect of an Algeria-Tunisia-Egypt group will give nightmares, especially for a manager who is perhaps not in touch with the footballing rivalries of North Africa.

While Egypt are the team to avoid in Pot 3, Pot 2’s bogeymen are the Democratic Republic of Congo.

The Leopards are dark horses for the tournament as a whole, and are growing as a unit under Florent Ibenge. Semi-finalists in Equatorial Guinea, and bristling with pace and power aplenty, no team on the continent will scare the DRC when they are in the mood. Only Algeria scored more in qualifying, and the prospect of a match-up is tantalising.

Nigeria Super Eagles, three time AFCON Champions failed to qualify for the Gabon 2017 finals after losing to Egypt 1-0 in Alexandria, making it the second consecutive failure to reach the African most prestigious tournament.