10 Northern Governors In Washington On US Government Invitation 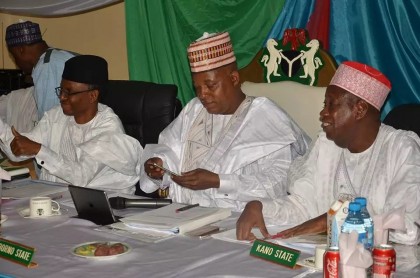 As ten Northern Governors on Tuesday began a 3-day symposium organized by the United States Institute of Peace which is an agency established and funded by the Federal Government of the United States of America, Governor of Borno State and chairman of the Northern States Governors Forum. Kashim Shettima has demanded practical benefits of the symposium, that will make impacts on the vast majority of citizens across the 19 Northern States.

Isa Gusau, Governor Shettim’s spokesman report from Washington that the symposium is a follow up on an earlier one hosted in March, 2014 under the Goodluck Jonathan administration when the United States invited Northern ‎Governors for a security symposium which dwelt on finding solutions to the Boko Haram insurgency and it’s spread from the northeast to other parts of Northern Nigeria.

Delivering his address on behalf of the Northern Governors’ Forum, Shettima said traveling down to Washington at a time of economic recession was likely to attract condemnation for the Governors but they defied the anticipated criticisms with expectaof benefits for their citizens.

“We believe that our hosts, USIP and officials of the U.S Government will work with us with the utmost sincerity of purpose to guarantee quick benefits that will improve the living conditions of our people. As Governors of the 19 Northern States, we hope to secure tangible benefits that we can point to our people as proof, that our visit here is not a jamboree as they would assume. By the time we wake up tomorrow, print, online and broadcast media houses in Nigeria would have screaming headlines, that “Twelve Northern Governors storm Washington” in the midst of economic recession, when our national currency, the Naira, has sharply depreciated against the U.S Dollar. Majority of our citizens will quickly conclude that we are here on a jamboree. Well, leadership isn’t only about popular decisions, leadership is about doing what is right at a time that is right.

Our visit to Washington is an opportunity to re-engage with our American partners on the most vital issues that can help us to quickly make transition from volatility to a phase of peace and development in the Northern States of Nigeria. Over the past few years, we have realized that the indices of development in our region have not only been some of the most damning in our country, they have also been the background against which the problems in our region have manifested. These range from the deepening problems of Boko Haram, rural banditry, spontaneous religious and inter-tribal violence, deadly clashes between pastoralists and farmers, cattle rustling as well as the Mother of them all, which is pervasive poverty that gives birth to the many forms of crime. The emergence or the re-surfacing of insurgencies are not episodic events. They manifest through lingering processes which eventually symptomatized into aprons like Boko Haram and ISIS.‎ We have the greatest respect and admiration for the American Government and we hold the United States Institute of Peace in very high esteem due to its track record. It is for these reasons that even though we anticipate criticism at home for this visit, we came here with high expectations” Shettima said.

The Governor explained that the north had benefited strategically from the 2014 symposium through deepening cooperation between Nigeria and institutions in the U.S which not only strengthened the fight against insurgency but also increased humanitarian support from the U.S Government through the United States Agency for International Development which has been so much for victims of the Boko Haram insurgency in the northeast and some parts of the northwest.

U.S Deputy Secretary of State, Anthony Blinken who delivered a keynote address at the opening said the U.S Government was keenly interested in working with the northern Governors to address conflicts and factors responsible top of which is poverty that is pervasive in northern Nigeria.

The first day held two panel discussions on “Conflict Drivers and Opportunities for Stabilization in Northern Nigeria” and also Rehabilitation, Reconciliation and Reconstruction” of communities destroyed by Boko Haram insurgents in different parts of Northern Nigeria.
Governors of Plateau, Zamfara, Adamawa and Borno State as well as Nigeria’s Minister of Interior, Major General AbdulRahman Dambazzau alongside some officials of United States Government took part in the two panel discussions held at different times.