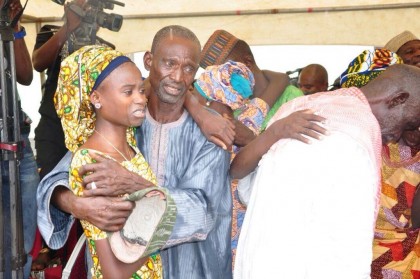 Femi Adesina, Special Adviser to the President on Media and Publicity at the weekend spoke on the release and return of 21 abducted Chibok schoolgirls and efforts by the Federal Government to ensure that those remaining in captivity are rescued. TEMIDAYO AKINSUYI monitored the interview and brings the excerpts:

Q:How do you feel with this release and return of these 21 abducted schoolgirls?

I feel elated; very happy and I rejoice with humanity, with Nigerians, with the Chibok community, with the girls, with their parents and everybody in general. This is a good day.

Q:Is it actually a release or a rescue?

It is a release. There is a difference between a release and a rescue. It is a release that came after negotiations as we have the Minister of Information (Alhaji Lai Mohammed) say yesterday. It was a release to build confidence between the two parties, to show faith between both parties. It is one step that will be followed by many others.

Q:Definitely, when we talk about negotiations, there must be give and take. What did we give to get these girls released/return? 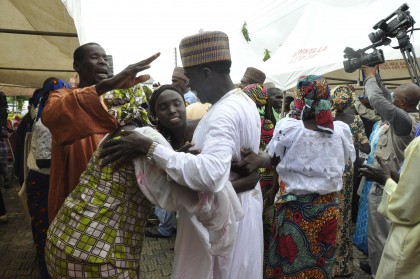 Q: It will be very hard for Nigerians to believe that, because we have always had discussions with the group in the past without any positive result, now we are seeing this one yielding positive fruit. What changed?

There is a saying that ‘To those who believe, no explanation is necessary; to those who do not believe, no explanation is possible’. I choose to be among those who believe and no explanation is necessary. I just believe. I believe it is a matter of confidence. In the past, there had been many of such meetings that could have led to releases but along the line, discussions broke down. Maybe because the confidence was not quite solid, particularly from the side of the Boko Haram but now, I believe that they trust the government, they trust those they are discussing with. Don’t forget that a foreign country was involved. Maybe they trust the process and they believe that if they do this as a show of their trust, faith and belief, then, maybe subsequently, some things will happen. What we have been told was that there was no swap and the girls were released just as a show of faith, a confidence building measure and I think it is good enough for us to believe.

Q: As you rightly said, we have two foreign bodies- the Swiss government and the Red Cross that were also part of this negotiation success. What if tomorrow comes and we hear that four Boko Haram commanders were exchanged for these 21 girls?

Q: Have you gotten any word from the freed girls about the other girls that are still in captivity?

You know that the girls came back yesterday morning and like the government has said, they need to be treated to psychological reconditioning. They need to be treated to medical reconditioning. They need to get them supplies, change their clothes , reunite them with their parents. There is a lot to do before you begin to debrief them. You don’t get them immediately and then you begin to debrief them immediately as to where the others are.

Q: If you look at the names of those released, it will seem like a targeted operation at the school. Looking at the name of the 21 released, it seems like the names of only people of other faith or religion. Could it be that Boko Haram deliberately went for these ones to change their faith?

Q: The girls have been abducted for over two years now and we expect that security agents should have given an inkling or information to the government that you are now part of, as to why that happened. Have you had discussions with any of them on the kind of life they were living in captivity?

You can be sure that that has been done but then, it is not declassified yet because it will be done by the security agencies, particularly by the office of the National Security Adviser. So, until they declassify the information they get from her, it is not something that is in the public domain yet. But has it been done? Yes, it has been done.

Q: What is the fate of the others yet to be released?

As we have been told, this is just one first step, which I also call a giant leap for humanity. But then, it’s the beginning of many more good things to come. This is just a show of faith, a confidence-building process between Boko Haram and those that are negotiating with them on behalf of Nigeria. You can be sure that there will be many more releases; how many batches, I do not know, but there will be many more releases; as many of the girls that are alive will definitely return to their parents.

Q: Are there Nigerians amongst this group of negotiators?

Actually, it has to be a variegated assemblage because Nigerians are the ones who know the issues at stake. Foreigners can’t come and it’s a complete foreign team. They don’t even understand what the issues are. So, definitely, it will be an admixture of membership; it has to be Nigerians and foreigners. The Red Cross has said it was not part of the negotiations and that they were just on hand to administer First Aid. We have the Swiss authorities but of course, they can’t be all Swiss. From our end, it was led by the DSS and I want to say that they have done a yeoman’s job. They have done something that must be commended.

Read Also; After Ye Have Suffered A While

Q: We have been on this issue for a long time without any success until Mr. President said he may agree to a swap in return and then, we have this happening. Isn’t that enough reason for anyone to believe there was a swap?

But anyone who wants to believe that should have enough faith in the government that this is a government that says it as it is and it is a government that you can trust. Now, when that government has said no swap, no cash, then you have to believe. We are not saying that may not happen, if necessary because the president has said he will do it if it comes to that. But we have heard from the Minister of Information that there was no swap and that it was a show of commitment, a show of faith, a show of confidence. Let’s believe that. Going forward, the paradigm may change or it may remain the same, but whatever may be necessary to get the girls back, the government is ready to do it.

Q: Former president, Olusegun Obasanjo, said Nigerians should forget about any hope of those girls returning. If you put that statement to what has just happened, what will you be saying?

Q: Do you still think that some may actually have been married off and will not reunite/return with/to their families?

In the report that came before we began this discussion, it is also stated that one returned with a baby and some are possibly pregnant. So, it shows you what has been happening to those girls.

Q: You are also a journalist, what else do you think we should know that we haven’t been able to get a grasp of about return of these girls?

For me at this time, the most important thing is that 21 of the girls are back. One had been recovered in May; that makes the number 22. They were 219 as we were told and according to somebody who spoke earlier, 197 is the outstanding figure. I pray that if all of them are alive, they will be recovered. That is what is important at this time. Of course, you know to the journalists, they want some other things. They want to probe and get some other information but you know that though I am a journalist, now I am working in government, so what I am looking out for is different from what the average reporter is looking out for.

Q: What exactly is the government doing to avert a reoccurrence of what we are handling now, given what transpired recently in Kaduna between residents and the Shiite movement?

Q: What will be the fate of these girls that have returned? Don’t forget their education had been truncated. What is the FG doing to bring them back to school?

The Vice President (Yemi Osinbajo) said it yesterday that they will be taken care of the return girls physical, medical, psychological, social, and educational and the whole gamut of it. The Federal Government will take care of them. When the first one (Amina) was recovered in May, don’t forget that the president himself also pledged that her education will be taken care of. So, the government will do all that is necessary to take good care of these girls, to rehabilitate them and get them reintegrated back into the society. I also wish to appeal to public-spirited people that this should not even be left to government alone. In collaboration with government, there are things that NGOs, individuals, public- spirited individuals can also do to contribute to the rehabilitation of these girls.