#Corruption: It Is Those Who Eat Sour Grapes That Will Have Their Teeth Set On Edge – Femi Adesina 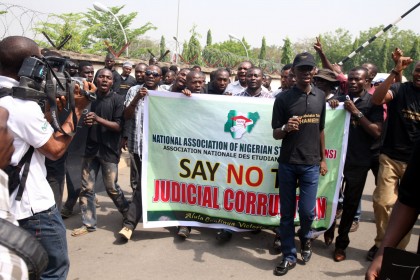 NANS Protest No To Corruption In Nigeria

Femi Adesina, SA on Media and Publicity to President Muhammadu Buhari, clarify and respond to national issues. The interview centered on corruption and other related matters in Nigeria.

Well, I will say it’s a pleasant thing when your country calls you to work for her and that is how I see this national assignment to serve as the special adviser. I have always admired Muhammadu Buhari since his military days as head of state.

Q:Wow, what were those things that set him apart?

There are certain things he holds dear that just resonate with me. Number one is discipline. The fact that he has personal discipline and wants people around him to be disciplined just flushes with my personal conviction. Then, his simplicity. If you know him, he holds power with simplicity ,lives a simple lifestyle and his commitment to serving the country and making an impact in the lives of the ordinary Nigerians. I also love to make an impact in people’s lives whenever I can.

Q: The president outlined three things that he intended to do including fighting corruption, revamping the economy, and security. There are people who believe that a time frame should have been fixed, rather than say soon.

To put a timeline is to play God. But no man can play God. There are still some variables that are not within human control but need divine powers to intervene. If a man does all he can, he will still need the grace and mercy of God to get the desired result. For instance, Japan is what you will call a world power in some areas. Do you know that Japanese economy has been in recession for 16 years? And Japan would have loved to exit recession in six months. Coming back home, before the economy went into recession, it had been predicted that If at the end of a certain quarter, the economy continued to contract, then it will go into recession, and it happened. Now, there is another prediction that by the last quarter of the year or at the worst case scenario, the first quarter of 2017, Nigeria will exit recession. How come that people believed the first prediction, and would not believe the prediction that the economy would exit recession?

Q: Maybe in some quarters, people believed that those who head fiscal policy and monetary policy are not in harmony.

It could be a mindset. But all those serving or working in the government are doing it for the same purpose and pulling in the same direction.

Q: Some people have put a question mark on the economic team of President Buhari, what’s your take?

Yes, we have heard that severally and I have always responded to it. I said, in a country that has a national economic council headed by the VP, who is a professor of law. Do not forget that the International Monetary Fund (IMF) boss, Christine Lagarde, is also a lawyer. The way the world is now, what you study does not matter but what you can do and achieve. Today, it is more of common sense than paper qualification. The team comprises of the VP, Finance Minister, Minister of Budget and National Planning,Minister of Investment, Trade and Industries, Chief Economic Adviser, and CBN governor , yet they still say there is no economic team.

Q: Maybe there are some people that they truly want in the team…

I think it is the mindset of bringing in big names , captains of industry, that is what Nigerians are used to. But there is no rule that says that is the template that every administration must adopt.

Q: Why then did the FG invite private investors, if they were not going to make as much impact?

The threshold of knowledge never closes, that is why. You must always borrow opinions and counsels from different kinds of people. Recently, there was an economic retreat, and who were the people there? We have Dr Ayo Teriba, Bismarck Rewane, Dr. Obadiah Mailafia, Rev Tunde Lemo, both former deputy governors of the CBN, and Bode Augusto. They made presentations to the government. It was a retreat and every member of government was there and looked at the economy from all sides. That broadens the scope of what government is doing.

Q:But how much of these recommendations has government been able to use?

The raging issue of whether national assets need to be sold or not came up for the first time at that forum, and it tells you that that retreat was a useful session, and it was the second in the series.

Q: How does the government intend to go about using agriculture , and critical infrastructure to revamp the economy?

There is a saying,that you put your money where your mouth is. The federal government has said it will use agriculture and mining as the mainstay of the economy, and If you look at the budget for the year and even the one that is coming, you will see the priority on agriculture. Over N740 billion has been released and some critical sectors like power, works, agriculture and mining have taken the chunk of those releases. It shows you that the government is following up its declaration with action.

Q: Nigeria is known for cocoa in the west, cotton and pyramids of groundnuts in the North, but now, it is about rice, which has become a staple food, as it were. What about other agricultural products that the government can also invest money into?

It is not just rice, there is diversification. Seeing that rice importation costs this country $2 billion every year and if such is pumped into agriculture, we will know the difference. Two billion dollars can build lots of roads in this country in one year, it is not just rice but it gets more attention because it consumes so much foreign exchange.

Q: What is your opinion on the anti-corruption drive of the President today?

If there is something the president abhors, it is corruption. No matter how close you are to him, once you are tainted with the brush of corruption, you are on your own. Don’t forget that one of the people closest him got mentioned in the arms saga, and he was arrested by the EFCC. Not until he made some handsome refunds, he wasn’t released. That is the president for you.

Q: Some say the fight against corruption is selective?

Q: Why is the president not beaming searchlight on his party or other parties?

Now, if I can answer with a rhetorical question. A lot of Generals are facing trial, are they PDP? It is someone that eats sour grapes that his teeth will be set on edge. That exactly is what is happening.

Q: Does Mr. President know what the poor feels?

What else would Mr President say. All his life, he had been a salary earner and he knows what it feels when salary is not enough. And that is the truth. Look at the assets declared, for a man who had been governor of the old northern eastern state, now divided into six states, oil minister for three and quarter years. You know what it means to be oil minister and he doesn’t have oil bloc or money stashed away in different banks across the world.

Q: On Boko Haram or security issues, what is your scorecard about your boss?

(Laughs) When you are asking me about scorecard and it is on security, that is his greatest strength? He is a retired General, not just an armchair General but one who has seen action in many theaters of war. We know that he won his stripes. Now,look at the situation when he came in 2015, as Boko Haram had spread to the North Central and North west , which showed they were coming to the South west and if they had happened, they would penetrate the South-south and there won’t be a guarantee that Nigeria would remain. But when he came, he took the battle to them and drove them out of North west, North central, and they became circumscribed in Sambisa forest and that’s where the remnants are being flushed out now. I think we should applaud Mr. President for securing the country. He always says that you can’t administer a country you haven’t secured. Security, for him, is paramount.