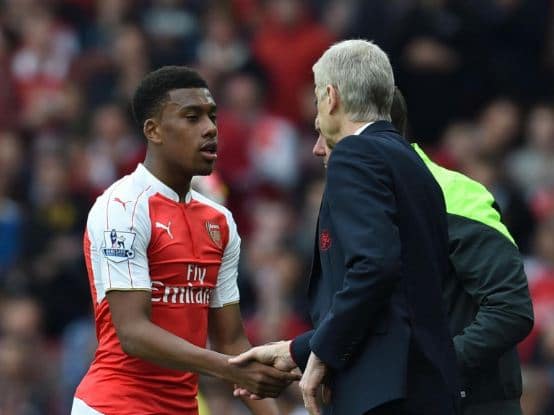 The Arsenal manager Arsene Wenger was full of the praise for the young winger, Alex Iwobi but urged him to be more confident when it comes to finishing in order to aid his development at the club

The Nigeria international, 20, has developed into a key figure at the Emirates since breaking into the first team last term, but he has been struggling in front of goals.

Iwobi netted just twice in 21 appearances in all competitions last term, while he still awaits his first goal this season after 11 matches.

Iwobi joined Arsenal while still at primary school, and was first involved in a first-team match as a substitute in a League Cup match against West Bromwich Albion on 25 September 2013.

Wenger has hailed the attacker’s passing skills, but feels he has work to do when it comes to becoming more clinical in front of goal.

“You can see that he is not a typical winger,” Wenger told reporters.

“I think he can play in the number 10 role. He turns the game forward, he passes the ball through the lines very well, he has a final ball in him. I think he has it all in the locker to pass and give the final ball.
“What you want from him now is the finishing and that is still a little part that is missing in his game. He is too nervous at the moment when he has the possibility to finish.”

Born in Lagos before moving to England at the age of four, he is the nephew of former Nigerian midfield maestro Jay-Jay Okocha.

“He reminds me of his uncle, Okocha,” Ozil told Arsenal Player. “He was a player I loved watching. Alex reminds me of a mixture of him and Davids.

“He is really strong on the ball, also defensively, but he is good in front of goal too. He knows exactly what he can do. He is not scared and does not hide on the pitch.” He said.