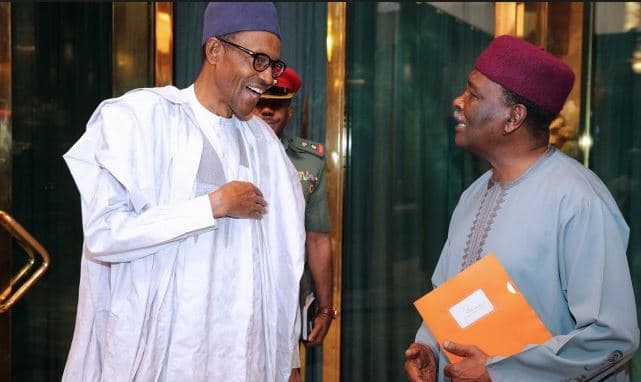 Buhari Grants Audience To Gowon At The Presidential Villa

President Muhammadu  Buhari on Thursday granted audience to the Former Head of State General Yakubu Gowon in furtherance of his strategic consultations with critical stakeholders in the Change Nigeria project.

The Former Head of State who arrived The Presidential Villa at about 2 o’clock in the afternoon was received by the President at the entrance to his office.

The two leaders thereafter retreated for talks behind closed doors which lasted about one hour. Details of their discussions were not made public  and General Gowon did not speak to journalists.

This is the second time the former Head of State is visiting the president in the last two months.

General Yakubu Gowon (retd) became the Head of the Federal Military Government of Nigeria from 1966 to 1975.

During his rule, the Nigerian government successfully prevented Biafran secession during the 1967–70 Nigerian Civil War.

After he was overthrown in 1975, Gowon subsequently went into exile in the United Kingdom, where he acquired a PhD in political science as a student at the University of Warwick.

He very much became an integral part of the English community in his area. He served a term as Churchwarden in his parish church, St Mary the Virgin, Monken Hadley.

He returned to Nigeria in 1983, and in the 1990s he formed a non-denominational religious group, Nigeria Prays. General Gowon today serves an ‘elder statesman’ role in African politics, operating as an official observer at the Ghanaian presidential elections 2008.

Gowon has also involved in the Guinea Worm Eradication Programme as well as the HIV Programme with Global Fund of Geneva. He founded his own organization in 1992 called the Yakubu Gowon Centre.

The organization is said to work on issues in Nigeria such as good governance as well as infectious disease control including HIV/AIDS, guinea worm, and malaria.