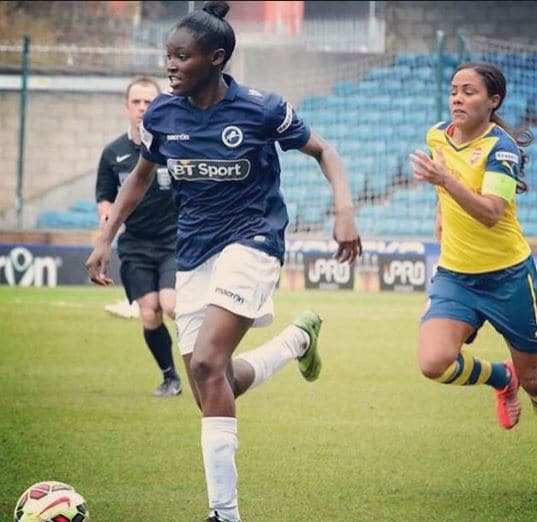 Nigeria-born Rinsola Babajide netted fourteen goals in the second half for the Univeristy of East London women’s football team in their 40-0 demolition of the University College London at the British Universities and College Sports cup game.

The UEL women were 15 goals up in the first half before rounding up the game with 25 goals in the second half in their second fixture of the BUCS Wednesday.

Babajide who plays for Millwall Lionesses was on target for the England U19 in their 2-1 victory over USA U19 at the Women’s International Cup a week ago.

The England youth international took to the social media to celebrate the victory.

Rinsola is described on the Millwall Lionesses website as an exciting young striker with bags of pace.who joined the Lionesses from Millwall’s own Academy team where she is currently studying in her first year on the club’s scholarship programme.

She joined the Lionesses from Millwall’s own Academy team where she is currently studying in her first year on the club’s scholarship programme.

“She was with Crystal Palace Ladies from the age of 12 and was a regular with Palace’s reserve side as well as featuring six times for the first team.

“A versatile performer, Rinsola is happy to play anywhere in the park but prefers to play as a striker or on the left side of midfield.” Millwall Lionesses website said.