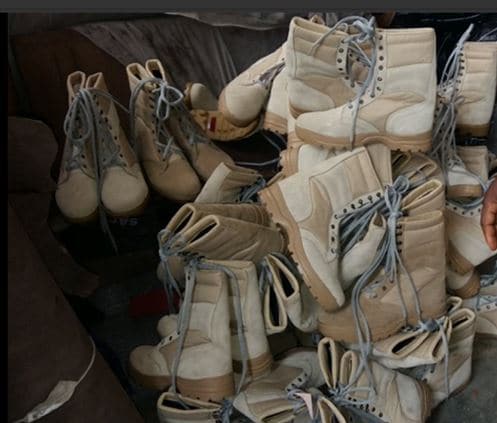 Senate President, Dr Abubakar Bukola Saraki has commended the Nigerian Army for its decision to purchase 50,000 pairs of shoes from local manufacturers in Aba for the use of officers and soldiers.

He said the move shows that the military is living up to its billing as an institution that can play vital roles in boosting the national economy.

In a statement by his Special Adviser on Media and Publicity, Yusuph Olaniyonu, Saraki said the army’s decision to patronise ‘Made In Nigeria’ shoes is a good example which shows the force as a pace setter and a truly national institution which is ready to contribute its quota in ending the present economic recession in the country.

The Senate President who is a long-time champion of the Buy Made in Nigerian campaign and has been a major supporter of the Aba local manufacturers urged all the other military and para-military forces like the Air Force, navy, police, civil defence corps and the National Youth Service Corps to emulate the army by immediately banning the purchase of all imported shoes and foot wears in preference for locally produced ones.

ALSO READ: Patronage Of Made In Nigeria Goods Best Panacea For Economic Recession

He also urged the military and paramilitary agencies not to limit their patronage and promotion of Made in Nigeria goods to only shoes but to other items that can be sourced locally, while also praising the Air Force for the co-operation it is forging with the Innoson Motor Group in the area of manufacturing of some aeroplane parts.

“This is the essence of the amendment of the Public Procurement Act by the Senate since June. The new law compels all Ministries, Department and Agencies of government to compulsorily give preference to goods and services which can be sourced locally. We believe one of the gains that our country will derive from this recession is to make our people look inward and patronise locally made goods.

“We believe one of the gains that our country will derive from this recession is to make our people look inward and patronise locally made goods.

“Patronage of Made-in-Nigeria goods is an obvious panacea for our economic problems. We will by doing that increase our Gross Domestic Product (GDP), empower our youths, challenge their creativity, increase revenue generation ability of state governments and improve on the sense of self-pride and patriotism of Nigerians”, he said.

The Senate President further advised state and federal governments to encourage local manufacturers by providing them with the necessary infrastructure, soft loans, patronage and helping them to improve the quality of their goods as well as facilitating their ability to access the export market.

Saraki also implored organised groups like the National Economic Summit Group (NESG), associations in the field of marketing communications and others who can help in the areas of goods packaging, sales promotion and quality enhancement to engage the local manufacturers and see how they can help them broaden their reach and produce goods that can be sold across the world.

“We have an opportunity to turn our challenge to prosperity. We can create mass employment and make the private sector centre of our economy if we can make our small and medium enterprises prosper.

This is a task for all of us and this promotion of Made-in-Nigeria is a cardinal point in the Agenda of the present Senate”, he said.