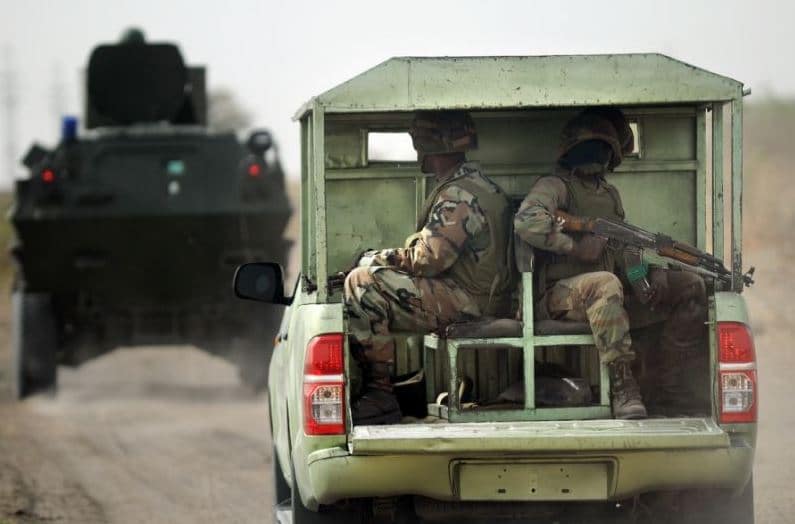 At about 9.00am this morning, troops of Operation LAFIYA DOLE deployed behind Bakassi Internally Displaced Persons (IDP) camp, Damboa road, Maiduguri, on security duty, intercepted and killed a male suicide bomber who had attempted to sneak through the troops’ inner parapet towards the IDP camp.

This was made known in a press release issued by the Acting Director Army Public Relations, Col. Sani Kukasheka Usman

The vigilant sentry sighted the bomber and laid in wait until the suicide bomber came close. The sniper instantly shot and killed the terrorists as he tried to force his way to the western flank of the IDP camp fence.

Fortunately, the Improvised Explosive Device (IED) vest strapped on the bomber failed to detonate. Consequently, a combined team of military and police Explosive Ordinance Device (EOD) have been called to safely detonate the IED.

The situation at the camp and the general area is calm.

It can be recalled that on Saturday, 29 October 2016, in the early hours of that day, a twin suicide bomb blast occurred at the entrance of Bakassi Internally Displaced Persons (IDPs) camp and NNPC Mega Filling Station, Damboa Road, Maiduguri.

The attack killed nine (9) persons and twenty-four (24) persons were injured.

The Deputy Director, Army Public Relations Department, Col. Mustapha Anka, explained that at the Bakassi IDPs camp, the suspected female suicide bomber ran into a group of men and women at the entrance while they were coming out of the camp, killing 5 men and injuring 11 women.

He added that at the NNPC, another female suicide bomber followed a fuel tanker in Keke NAPEP tricycle with the sole aim of gaining entry to cause maximum damage and casualty but was prevented from gaining access to the station by another vehicle.