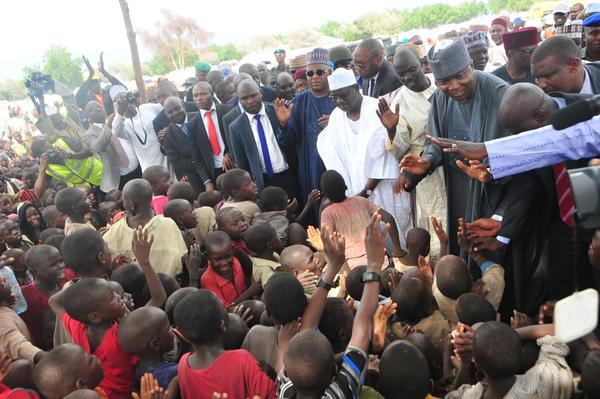 He also pledged the cooperation of the Senate in ensuring the quick passage of bills to help address the crisis of the IDPs in the country.

According to the Senate President, “it is disheartening and heartless when you read and hear of cases of corruption in the supplies of food items when you see cases of malnutrition and mortality in the IDPs. When you see children with cases of malnutrition and you know there can be a speedy recovery when the necessary drugs and nutritional items are provided with the necessary food items”.

He pledged the readiness of the National Assembly to cooperate with the UN Commission for Refugees in addressing the challenges facing the various IDPs in the Middle belt region of Nigeria.

Dr. Saraki told the leader of the delegation that despite the fact that the Senate has no committee on the Internally Displaced Persons did not mean that the upper chamber is unmindful of its legislative duties in the IDPs, explaining that there are committees of the Senate that are saddled with the responsibilities of tackling poverty and its related challenges.

He pledged the cooperation of the Senate to work with the House of Representatives in the passage of legislation that would enhance the welfare of the persons in the IDPs.

Dr. Saraki also pledged to help facilitate the domestication of the kampala Convention on Statelessness and Protection of Refugees.

Earlier, the leader of the delegation, Mrs. Dikongue-Atangana told recounted the efforts of the UNHCR to rally support on the domestication of the Kampala convention in the troubled regions within the country.