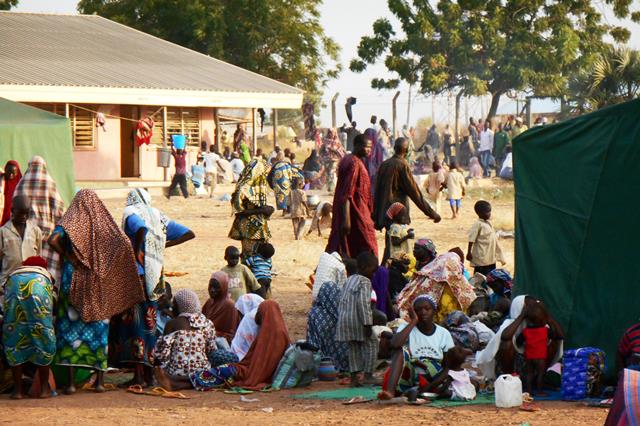 Isa Gusau, Maiduguri: Following recent reports about some officials sexually harassing female internally displaced persons, Governor Kashim Shettima has‎ revealed his plans to write letters requesting the Inspector General of Police, the Director-General of the Department of State Security, the National Agency for Prohibition of Trafficking in Persons, NAPTIP and the National Drugs Law Enforcement Agency, NDLEA to deploy female and male undercover detectives to all IDP camps in Borno State to spy on culprits and bring them to book.

Speaking at a courtesy call by a delegation from the National University Commission on tour ongoing infrastructure at the proposed Borno State University, which held at the Government House in Maiduguri on Tuesday, Governor Shettima said deployment of undercover agents will be a permanent measure in addition to the urgent need for investigation of the report by the Human Rights Watch ‎released days ago which said some female IDPs interviewed had alleged they were sexually harassed by some security officials, to the extent of getting them pregnant.

‎”Today, as Governor of Borno State, there is no issue that gives me a headache like the unfortunate by-products of IDP camps. Our citizens were violently sent out of their houses and communities, it is their fundamental rights to be provided alternative accommodation with their food and health cater for. Sadly and very sadly indeed, the IDP camps have become avenues that horrible stories of sexual slavery, prostitution rings, drug peddling and other social vices are emanating from. Only yesterday (Monday) there was a report by a Human Rights group alleging incidences of sexual abuses by some Federal and State workers in some of the IDP camps. This is highly condemnable. Apart from investigating these claims and arresting culprits which are absolutely necessary, I am going to write letters to the Inspector General of Police, the Director-General of the DSS, the National Drugs Law Enforcement Agency and may be the National Agency for the Prohibition of Trafficking in Persons, requesting all of them to deploy female and male undercover detectives to all our camps to permanently spy on anyone involved in sexual harassment, any form of prostitution, drugs trafficking, possible child trafficking and even the allegations of diversion of food items meant for IDP’s. I would want these detectives to report their findings to their security establishments and whoever is found wanting should be picked up without notifying me so long as there is verifiable evidence to prosecute him or her. Ladies and gentlemen, I am tired of applying the element of persuasion in handling the issues of IDP’s, we need to wield the big stick. The problem with managing the IDP camp is that you are dealing with a population of two or more local government areas in one location and you cannot imprison them by restricting or stopping them from leaving the IDP camp in the day time. When a female IDP leaves the camp in the morning, you cannot be in control of where she goes and who she sees. If she leaves the camp and returns the following day, she may claim to have visited a family member and little can be done. I strongly believe there are cases of sexual harassment but some of the women may be consenting to sexual advances largely due to extreme poverty and loss of value system. We have to instill sanity into the IDP camps and I hope we will not end up having human rights activists telling us we cannot deploy undercover detectives into IDP camps due to one form of rights violation or the other. Desperate situations call for desperate measures. Sexual harassment of female IDPs is a desperate situation. None of us here is beyond becoming an IDP if Allah decrees and none of us would fold arms if his or her daughter is in a position to be sexually harassed, so we must act now” the Governor said.

Shettima explained that ‎the history of Borno State has painted negative by the Boko Haram insurgency noting that the State has gotten tired of counting deaths and destructions.

Read Also: Saraki Commends Army For Purchase of Made In Aba Shoe

“The Borno Story that has been painted very badly by the Boko Haram. We are even tired of counting the number of deaths, a number of those of injured, the value of private institutions and private property destroyed and the huge number of persons internally displaced” the Governor said.