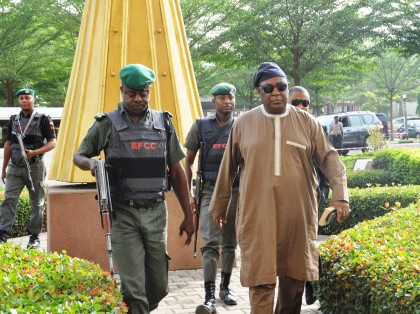 Faleke, a banker with Guarantee Trust Bank and account officer to Badeh’s company account (Iyalikam Nigeria Limited) told the court how Badeh became a co-signatory of the company account in January 2015 and how he gave her instructions to carry out several transactions running into millions on the account.

“I went to Badeh to market for an account and in the course of our discussion I collected his wife’s number (Mrs Mary Badeh) and found out that she was a signatory to an account (Iyalikam Nigeria Limited) in my bank. The account was dormant at the time and I reactivated the account.

“Sometime in January 2015, Mrs. Badeh gave instruction to add Air Chief Marshal Alex Badeh as a co-signatory to the account.

“Iyalikam Nigeria Limited had four types of accounts in my bank which were Naira, Dollars, Pounds and Euro, but only the Naira and Dollar accounts were operational.

“There was also another instruction to transfer the sum of N30million in two tranches of N16million and N14million on November 10 &13, 2015 respectively to Havco Nigerian Limited”, Faleke narrated.

The documents which included the letter to EFCC from Guarantee Trust Bank; statement of account; Corporate Affairs Commission (CAC) documents; and account opening package were shown to the witness, which she identified. Thereafter Jacobs sought to tender the documents in evidence, but his application was objected to by counsel to the 2nd defendant, Samuel O. Zibiri, SAN.

Zibiri argued that, the principal document (Letter to EFCC) made no reference to the “CAC document” attached to the evidence.

Relying on the case of “Textile Allied Products Limited vs Henri Steven Shipping Company Limited, 1989”, Zibiri argued that the letter had nothing to do with the “CAC documents”.

He urged the court not to receive document in evidence.

Responding, Jacobs argued that, “the CAC documents relate to the principal document in the sense that it is part of the account opening package as identified by the witness and the learned counsel has not cited any part of the Evidence Act to challenge the admissibility of the document. The onus is on the prosecution to prove that the 1st defendant is the brain and personality behind the 2nd defendant (Iyalikam Nigeria Limited).”

Justice Abang, after listening to both arguments overruled the objection by Zibiri and marked the documents as exhibits E1 to E30.

The PW8, in a cross-examination by Badeh’s counsel, Akin Olujimi, SAN, confirmed that Badeh was a signatory to Iyalikam Nigeria Limited and that she received telephone and written instructions to transfer funds to various accounts.

The matter has been adjourned to November 3, 2016 for further cross examination.

Badeh is being prosecuted by the EFCC alongside his company, Iyalikam Nigeria Limited, for allegedly abusing his office by using the dollar equivalent of the sum of N1.4billion (One Billion, Four Hundred Million Naira)removed from the accounts of the Nigerian Air Force, NAF, to purchase properties in choice areas of Abuja between January and December, 2013.

The offence contravenes Section 15 (2) (d) of the Money Laundering (Prohibition) Act, 2011 (as amended) and punishable under Section15(3) of the same Act.