inno.korieNovember 4, 2016 5:54 pm 0
The Economic and Financial Crimes Commission, EFCC, on Friday, November 4, 2016, arraigned one Oluwatoyin Jinadu, a former banker with First City Monument Bank, FCMB, on a 20-count charge bordering on theft and forgery to the tune of N52million.
He was brought  before Justice Sylvanus Oriji of the FCT High Court sitting in Apo, Abuja 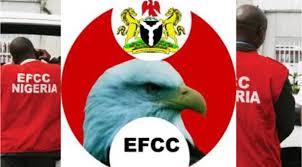 As account officer to Dr. D. K. Okoye in the Wuse 2 Branch of the bank, the accused allegedly transferred N52million from Okoye’s account without his knowledge or consent, into accounts in Zenith Bank, GTBank and Union Bank.
These transfers, totalling N52million, were alleged to have been done through forged transfer instructions.
Jinadu was first arraigned before Justice Adebukola Banjoko of the FCT High Court on July 12, 2012, but the case had dragged following several frivolous applications and interlocutory appeals up to the Supreme Court, including a petition alleging bias against the presiding Judge – a situation that led to the withdrawal of the trial judge.
One of the counts reads:
“That you, Oluwatoyin Jinadu, on or about the 25th day of February 2010 in Abuja within the jurisdiction of this Honourable Court, while working as a staff of First City Monument Bank stole the sum of Twenty Million, Four Hundred and Eighty Five Thousand, Nine Hundred and Sixty One Naira, thirteen kobo (N20,485,961.13) belonging to one Josephat Okoye and thereby committed an offence punishable under Section 287 of the Penal Code Act.”
The defendant pleaded not guilty when the charges were read to her. In view of her plea, counsel to EFCC, Samuel Ugwuegbulam, urged the court to fix a date for trial.
However,  defence counsel, M. A. Awul, through an oral application urged the court to grant the accused bail relying on Section 162 of the Administration of Criminal Justice Act, ACJA, and Section 36 (5) of the Nigerian Constitution.
According to him, “the accused is presumed innocent until proven guilty. We urge your lordship to allow the defendant to continue on the existing bail granted him by your learned brother or in the alternative, grant her bail on such terms the court may consider appropriate to enable her attend trial”.
Responding, Ugwuegbulam opposed the application stating that, “since the former presiding judge has declined jurisdiction on the matter, the bail has automatically elapsed. Also, my lord, punishment for the offence the defendant is being charged is enough incentive for her to jump bail”.
Justice Oriji however, granted the accused bail in the sum of N8million with two sureties in like sum. The sureties must be residents in Abuja. One of the sureties must be a civil servant in the federal civil service not below GL12.
The case has been adjourned to December 5, 2016, and January 17 – 18 2017 for trial.