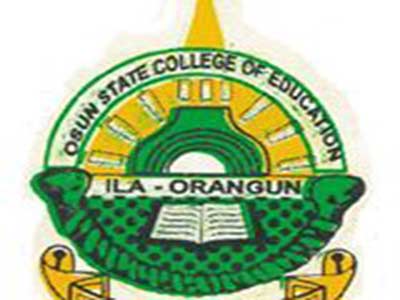 In a related development, the Commission also arraigned one Kayode Adeyefa before Justice A. D Oladimeji of the Osun State High Court, sitting at Ila- Orangun on a 4-count charge bordering on obtaining money under false pretences and stealing.

The report from the office of EFCC Media & Publicity shows that the alledged person have diverted the sum of N12, 559,800.00 belonging to the Osun State College of Education Student Insurance Welfare Scheme to his personal use.

“Adeyefa collected 15 cheques to the tune of N12,559,800.00 from the scheme as premium but failed to remit same to the insurance company where he works”.

One of the charge reads: “Kayode Adeyefa between the Months of June and November, 2013 at Ila-Orangun within the Osogbo Judicial Division with intent to defraud obtained the sum of N3,650,000.00 (Three Million Six Hundred and Fifty Thousand Naira) from Osun State College of Education, Ila-Orangun under the false pretence that same was premium payment for Student Insurance Welfare Scheme”.

He however pleaded not guilty to the charge.
In view of his plea, the prosecution counsel, Sanusi Musa Galadanchi asked for a trial date and prayed the court to give the matter accelerated hearing.

But the defense counsel, Olajide E. Egbetunde informed the court that he had filed bail application and sought the leave of the court to move the motion.

Justice Oladimeji granted the accused person bail in the sum of five million Naira and 2 sureties in like sum.
The matter was adjourned to November 25, 2016 for hearing.