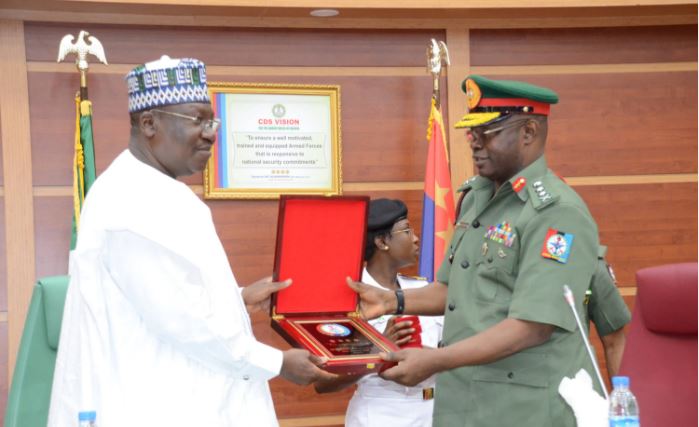 Armed Forces Will Defend The Sanctity of Nigeria Despite Challenges – CDS

Rabe Abubakar, Abuja: The Chief of Defence Staff (CDS) General Abayomi Gabriel Olonisakin has reiterated the commitment and the determination of the Armed Forces of Nigeria to protect the sanctity of the nation despite the challenges it is facing.

General Olonisakin made this known Tuesday when the Senate Committee on Defence visited the Defence Headquarters (DHQ) on oversight assignment.

The Chief of Defence Staff expressed gratitude to President Muhammadu Buhari for his effort in providing resources to the Military in carrying out its constitutional responsibilities.

He said, “let me seize this opportunity to express our profound appreciation to the President, Commander in Chief of Armed Forces for his unrelenting efforts in ensuring that we are provided with the wherewithal to carry out our constitutional role despite the dwindling national resources.”
Read Also: Nigerian Army Loses Gallant Soldier

The CDS also acknowledged and thanked the committee’s assistance in ensuring that what is due to the Armed Forces is released without delay. “These have to some extent motivated us and enhanced our capacities. We are therefore more committed and resolute in carrying out our assigned tasks.”

The CDS further informed the committee that the DHQ successfully implemented the 2015 Budget in line with the Policy thrust of due process, accountability and transparency.

The Committee Chairman, Senator Ahmad Lawan disclosed that the purpose of the visit is to review the implementation of the capital projects of the DHQ and expressed their readiness to support the Armed Forces to achieve its aim and ensure better empowerment.

“It is the committee’s desire that all projects started in 2016 are completed and if need be for snowballing into 2017 appropriation, it will be considered,” Senator Lawan added.