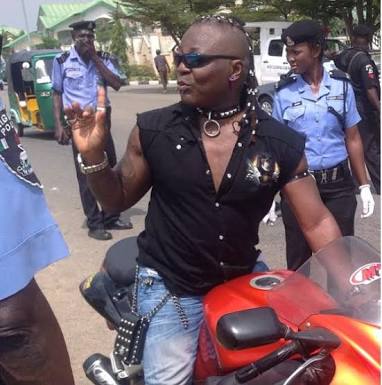 Charlie Boy To Lead Mass Protest In The FCT

Showbiz superstar and social activist, Charles Oputa, popularly known as `Charlie Boy’, on Tuesday said that he would, on Nov.15, lead a 10,000-man anti- corruption protest within the Federal Capital Territory, Abuja.

He told the News Agency of Nigeria (NAN) in Abuja that : “In the life of every human being, there comes a moment when we must take a stand on certain matters.

“Beginning from  Nov. 15, 2016, we, about 10,000 ordinary people with no political affiliations, will begin a series of mass protests and will occupy the nation’s capital.

“We are a coalition of people with no political affiliations and believers in the interest of our country.

“We also believe in the capacity of President Muhammadu Buhari to lead us in the right direction.

“This is part of our nationalistic engagement to help President Buhari root out corruption, impunity and mindless political criminality out of the Nigerian polity.’’

He said that the peaceful protest that would be tagged “Occupy Nigeria’’, would be targeted at all arms of governments as well as MDAs that are failing in their responsibilities of providing good governance for the people.

Charlie Boy who noted that the Buhari’s fight against corruption was yielding result urgent everyone who meant well for Nigeria to join hands in the ‘rescue mission’.

According to him, successive leadership failure and corruption over the years have left ordinary Nigerians suffering in the midst of plenty.

He said that the country was richly blessed with natural resources but had suffered from past bad leadership and sustained political criminality.

“Every local government and state of the Nigerian federation is feeling the impact of decades of a wasteful culture and recent years of mindless looting in governance.

“Over180 million people are at the mercy of few politicians who have mastered the art of creating division among her own people through religion, ethnicity, corruption, trivialities and frivolous issues.

“The future we are afraid of is gradually become our new reality daily,” he lamented.

He said that the civil society groups, students, market women and other stakeholders from across the country were being mobilized to be a part of the peaceful protest.

“This movement is bringing together men and women who are capable of giving something for the good of their country no matter their tribes or religion.

“Change is hard and difficult, but it is the only constant element in our humanity.

“It is time to become fearless and become comrades in the struggle for good governance, “he said.
Charlie Boy emphasized that the “occupy” protest was to tell political leaders at all levels that they must be accountable and selfless in their service to fatherland.

“This is a process of holding politicians accountable not only to their promises, but in their service to the Nigerian nation.

“We need all Nigerians to join us in moving this nation forward.

“Every Nigerian will not be on the street of the FCT, but support can come in whatsoever form,’’ he said.