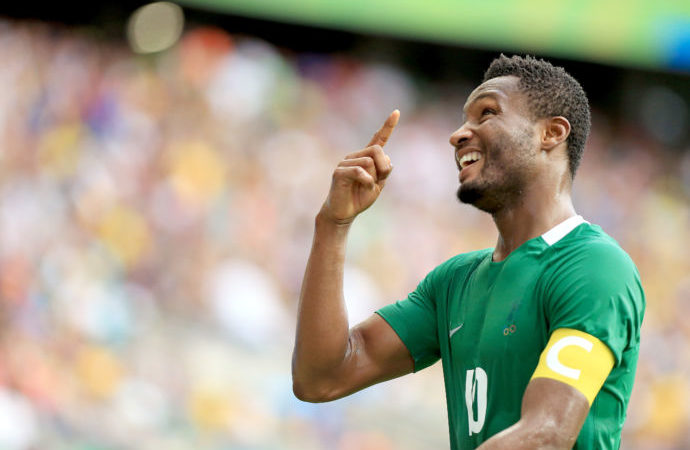 Eagles Top Group B After Nigeria Vs Algeria Match (3-1)

After 10 minutes of play, Victor Moses from the wing trouble Algerians to unleash his electric pace and direct running, charging at the North Africans’ back line. Skipping inside onto his left, his weaker foot, however, he drags his shot wide of the near post.

15mins of play, Saphir Taider tries his luck from range, but his effort is too central and all it does is mean Daniel Akpeyi’s first save of the game is a simple one.

After 25 minutes of tense play in the match #NGAALG Victor Moses directness gets its reward.

Driving through the centre of the field, he gets a spot of luck as some poor defending from Belkaroui gifts the No.11 a second opportunity, which he grabs with both hands, firing into the bottom left corner to give Nigeria the lead 1:0.

When all the teams were settling for the end of the first half. Mikel at 42mins of the match, he wheels away and punishes the Algerians for not playing to the whistle.

Algeria thought Nigerian’s captain was offside following Oghenekaro Etebo’s through ball, but flag stays down and was correctly adjudged to be onside, played on by Algerians Aissa Mandi and with the defence stood stock still, Mikel slots home from close range.

Game on! After missing one of Algeria’s better chances of the first half, Nabil Bentaleb fires a rasping drive into the roof of the Nigerian net from 25 yards.

The superb goal for a midfielder with serious talent, that was a cracker. Cameroon and Zambia will be celebrating that goal almost as much as the Algerians.

With Algeria throwing men forward, a four-on-two break saw the ball cycled out to an unmarked Victor Moses, who slots in to ensure the Super Eagles move on to six points at the 92 minutes.

Algeria had looked like tightening up the standings, following Nabil Bentaleb’s thumping finish, but Moses struck late on the break to bolster the hosts’ hopes of making it to Russia.

Nigeria’s win leaves them in full control of Group B, following Zambia and Cameroon ending all square. The latter’s trip to face Nigeria may well be crucial in deciding whether the Super Eagles can be caught.

The match ended 3-1 in favour of the Super Eagles of Nigeria.