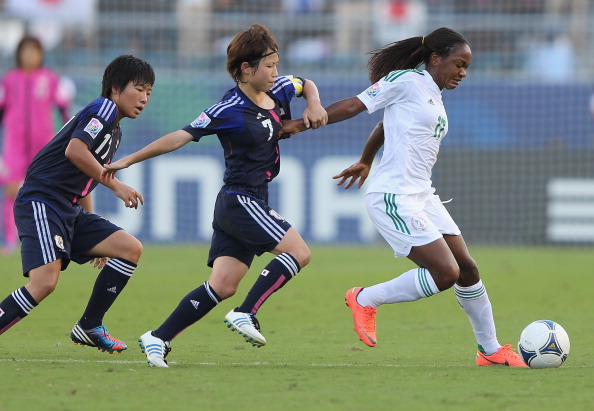 U20 WWC: Japan Put Six Past Falconets In Their First Match

Japan kicked off their FIFA U-20 Women’s World Cup Papua New Guinea 2016 campaign with a dominant victory against 2014 finalists Nigeria in Group B at Bava Park, Port Moresby. Mami Ueno bagged a hat-trick while Yuka Momiki scored either side of the break as The Young Nadeshiko ran riot in their opening game.

Japan started brightly and put the Nigerians under pressure from the off, with Ueno’s effort in the opening minute being tipped over the crossbar and out for a corner.

The Young Nadeshiko took the lead through Momiki’s close-range header on 32 minutes and doubled their advantage just three minutes later after Ueno got onto the end of captain Ruka Norimatsu’s neat pass and slotted past goalkeeper Sandra Chiichii.

The 2012 U-20 Women’s World Cup bronze medal winners were cruising after 51 minutes when Momiki notched her second of the game, while Mary Ologbsere’s own-goal just five minutes later piled on the misery for Nigeria.

Ueno recorded her second shortly after the hour-mark, making her way through the Nigerian defense and slotting home from close-range. She completed her hat-trick with a wonder goal eight minutes from time, embarking on a valiant solo run and smashing a powerful strike into the top corner.

Both sides return to Brava Park on 16 November when Japan next face Spain in a top-of-the-group clash, while Nigeria meet Canada.